We offer you a basket of choices for family planning

April 23, 2015. Bound by our own inhibitions, working on and talking about family planning and reproductive health is never easy, neither for men nor for women. It not only means shedding off the cultural baggage that keeps sexuality and reproductive health behind firmly closed doors but also negotiating social, cultural, and in many cases religious boundaries. These difficulties are compounded more so for a middle aged, semi literate women from a conservative backgroundwith little exposure to the outside world, who decides to work in her late 40s.

Much has been written about women/couples who embrace family planning choices, but little about people who are at the forefront of spreading awareness about these choices, and persuading couples to adopt family planning methods. This blog is about the personal journey of one woman – a journey that required her to step out of her comfort zone (home), and familiar environment (a Hindu dominant locality), and talk about and work on sexual and reproductive issues (which was earlier a taboo), to women and men in a Muslim dominant locality; and in the process becoming more aware, confident, and empowered.

“Ab sharm nahi aati hai; yeh batein main males se bhi kar leti hoon, shuru mein aurat ke saamne bhi jijhak lagti thi” (Now I don’t feel conscious talking about these issues even with men, but in the beginning I was hesitant even to talk to women about it) says Urmila with a smile. Urmila is a middle aged woman and mother of five grown up daughters. She is a healthworker with CARE India’s NGO partner SWARG, and works forthe Urban Poor Health Initiative (UHI).The UHI, being implemented by a consortium of NGOs, aims at improving the Contraceptive Prevalence Rate (CPR) in select cities of Uttar Pradesh by empowering women and men to choose the timing and number of pregnancies by using providers and methods of their choice.Being a health worker, Urmila persuades couples to adopt family planning choices and informs them about a range of contraceptives choices available to them. Her work also entails talking about family planning with community elders, religious leaders and other influential people in order to create a broader social sanction on adoption of family planning. 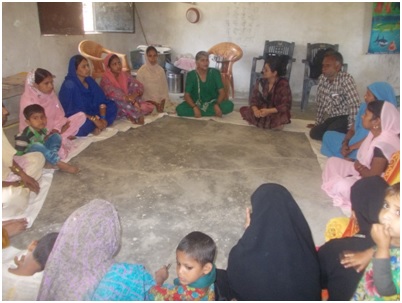 *Picture is for representation purpose only

Reminiscing about the time she started working inthe UHI project, Urmila told us that the initial months were trying times… being new to this “work”, it was difficult to talk about family planning, and recounted that in the beginning she consciously avoided visiting homes when she saw males inside the house. Added to this, there was high level of resentment and hostility among the slum dwellers about family planning and women of the slum were not ready to even talk to her. There were instances when she was categorically told not to enter the slum and doors slammed on her face. But now things are different – through her constant persuasion and sheer grit,the slum has a high uptake of family planning services. Pointing to the women in whose house, we are sitting; with a twinkle in her eye, Urmila says, “Shanno ab mujhe bhagati nahi hai”. Shanno – an informal women’s leader of the slum had earlier warned her not to enter the slum, but she become one of the first women in the slum to adopt family planning, and now she in turn persuades other women in the slum to take up such practices.