Why would anyone migrate to such living conditions? 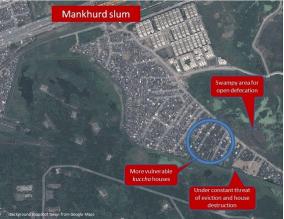 I first visited Mankhurd in Mumbai, a couple of years back, on a cool February morning. As I stepped into the slum, the first thing to hit me was the stink of rotting garbage. One could see garbage piles everywhere. The row of small houses tightly packed, served as the living spaces for hundreds to families. The stink became more acute as I ventured further towards the swampy area adjoining the slum. I was visiting some of the migrants in the area. CARE worked with the most vulnerable migrants in the area, through its EMPHASIS project. Mankhurd is situated on the eastern part of Mumbai and is the last stop before Navi Mumbai on the Harbour railway line. The Mankhurd slum is a large slum characterized by large scale deprivation. A study by the IIPS, Mumbai reveals that almost half the population frequently fall sick and “… those having larger family were more likely to suffer from any illness … The richer were less likely to suffer from any illness compared to the poorest. Muslims were more likely to suffer from illness than Hindus. Wealth quintiles, caste and religion appeared as predictors for illness. There is an urgent need to improve the living condition of the slum dwellers that face severe water and sanitary problems.” [i] [i] Prasad R & Singh M.N; Living condition and life style of Mankhurd slum dwellers; IIPS; http://paa2013.princeton.edu/papers/13050 accessed on 1.4.2014 Mankhurd is divided into various localities and clearly has all the attributes of the official definition of a slum mentioned here. “… those residential areas where dwellings are in any respect unfit for human habitation by reasons of dilapidation, overcrowding, faulty arrangements and designs of such buildings, narrowness or faulty arrangement of streets, lack of ventilation, light, sanitation facilities or any combination of these factors which are detrimental to safety, health and morals” Census of India, 2011 But why is the word ‘moral’ mentioned here? Is the Census of India worried about the morals of the slum inhabitants or are they worried that the conditions in the slums are such that the slum inhabitants will not be able to stay on the moral path? “A Slum is a compact settlement of at least 20 households with a collection of poorly built tenements, mostly of temporary nature, crowded together usually with inadequate sanitary and drinking water facilities in unhygienic conditions”. Pranab Sen Committee on Slums, 2010 “… a slum is characterized by lack of durable housing, insufficient living area, lack of access to clean water, inadequate sanitation and insecure tenure”. UN Habitat 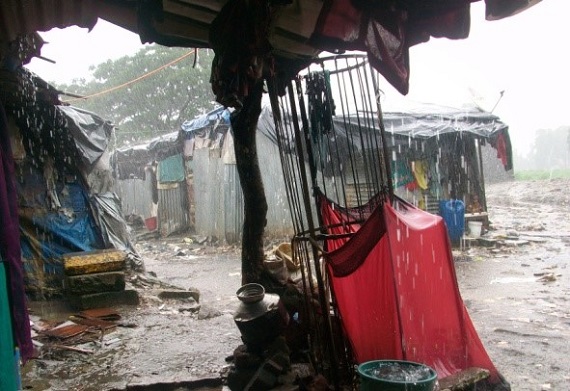 People live in 6ft by 4 feet or smaller tin sheds, held together by a bamboo structure and had polythene covers as roofs. As I walked further towards the swampy area, the semi-pucca houses, more towards the main road, gave way to the kuccha houses where Sheila stayed. Sheila, a feisty woman of about 30 years is a resident there. She works as a housemaid and manages her home. She and her husband walk 30 meters towards the open swampy area every morning to relive themselves. She works as a house maid in four houses. Her husband catches fish near the creek and sells them in the nearby market. They have to wait in long queues for getting drinking water and go to a ‘local doctor’ (non-MBBS) in case they are troubled by any ailment. There is a constant threat of displacement as the area in which they stayed was not a legal habitation. A nearby area had been bulldozed recently by the authorities and there was fear and anger writ large on their faces. The locality is in the cross-hairs of the police and other security agencies. Any Muslim who speaks Bengali is a suspect (probably from Bangladesh), even though they may have Indian identity cards. It is believed that police informers are everywhere and get paid for informing on people. Therefore discussion about identity and history is best avoided. The next visit, about four months later, shocked me even more. It was the rainy season and we had to wade through knee deep dark slush to reach the locality. This is when we heard the stories of how infants and toddlers died by rolling over in their sleep into the water (which just about reached the base level of the houses and threatened to submerge it anytime). Really! How is that possible? After going around the water logged area and hearing similar stories from others did the sickening reality sink. Is this Mumbai? 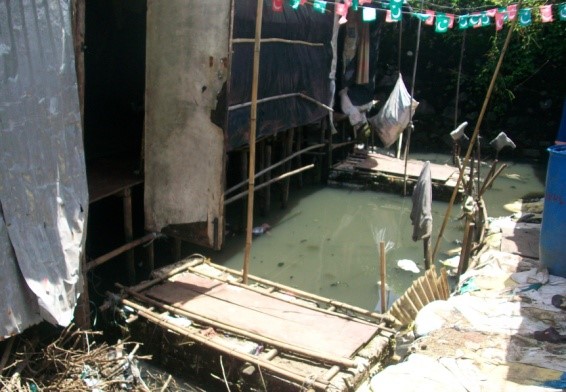 Why would anybody migrate to such living conditions and continue to stay there? Why can’t they just go back to their places of origin? Sheila says that the reason for her coming here is because “…there are no opportunities back at home, first my husband migrated and then after a year I joined him here. If I stay back at home, we will continue to take more and more loans. Even now we are re-paying the loans that we took.” The EMPHASIS baseline study[i] echoes the same. When asked about the reasons for migrating, financial difficulties was the top reason at 60% followed by lack of employment or business opportunities at 50% and better wages at destination at 43%[ii]. Each one of them have migrated because they believe they can benefit economically for themselves and their families. Initially Sheila was not so sure about coming here. However the fact that her husbands’ cousins is also here and so are three more people from her village continues to give her strength. They do share a strong emotional connect and strengthen hope and fortify well-being as well as keep aspirations alive. Any decision of going back is a shared decision. At the heart of it all is the aspiration of a better future. Sheila talks about the inevitability of migration, but does not want to remain here forever. “We want to earn enough to be able to go back home in about 4/5 years. We want to build a pucca house for ourselves back home.” The EMPHASIS baseline also found that that hardly anyone wanted to stay back. They wanted enough money to purchase land, save money for future security, educate their children, buy a good house, arrange a good marriage for their daughter, start a small business, or purchase motor vehicles to start a business. Sheila talks about Lajjo who initially came to pay back loans incurred by her family and for educating her children in a good school. After a couple of years, she thought of going back, but continues to stay as she now wants t buy a piece of land for her family. The study also reveals that some migrants who have gone back home have come back after some time. As found at Mankhurd, especially if their aspirations are not fulfilled, financial goals not achieved or that aspirations have changed. Thus along with economic reasons, is also the aspiration for a better living “At first it was difficult especially as there are no sanitation facilities here, and I was ashamed to go out. Now I have got used to it. If my husband is not able to earn enough, we sacrifice meals. I hope my children will never face such a situation” says Sheila. However, she says, “Nobody in our home knows about these conditions, they think we work in Mumbai and have a great time. An article on psychological pressure on Migrants says that they have to buy clothes and stuff for other family members, as this is expected from them[iii]. Sheila continues “I am now well received in my in-laws family when we go back.” They need to keep up this façade, as the high esteem they now have is something they have never had before. Reflection: Is the migrant so different that we treat them as the ‘other’? Isn’t this about aspiration for a better living for themselves and their children? Isn’t this about compromising on current living conditions for the hope of a better future? Isn’t this about having the courage to take a risk and the initiative to be able to earn in a new place. Isn’t this about enhancing social prestige among friends and family? Not very different from the values that we hold dear. And obviously there is nothing moral or immoral about it!! -Nabesh Bohidar Regional Monitoring and Knowledge Manager, EMPHASIS Regional Secretariat, CARE India [i] Wagle S, Bohidar N, Samuels F, Zarazua M,N, Chakraborty S; A social research on cross-border mobile populations from Nepal to India; https://www.careindia.org/sites/default/files/pdf_file/EMPHASIS%20Baseline-%20Nepal%20India%20route%20report.pdf ; accessed on 1-4-2014 [ii] Sultana T, Das A, Sultana M M, Samuels F, Zarazua M N; A social research on cross-border mobile populations from Bangladesh to India; http://www.aidsdatahub.org/sites/default/files/documents/Bangladesh_India_route_report.pdf; accessed on 1-4-2014 [iii] From Nepal with Dreams, Afternoon Despatch and Courier; http://www.afternoondc.in/special-report/from-nepal-with-dreams-shattered/article_82774; accessed on 5-4-2014