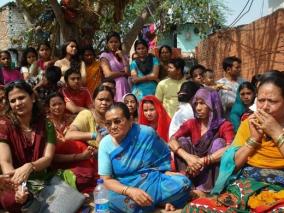 Putul says, “I am 34 years old. My husband is a farmer, and we have two sons and one daughter. In 2009 as we were struggling financially, I decided to come to India. My brother-in-law helped me cross the border, without facing any challenges. And, then I reached Mumbai. I struggled a lot in the first year as I was unable to find a decent job. In due course, I found a job in a factory to make cutlery. It paid 10,000 Indian rupees (US$165) per month. I shared a room with four other women, who were also working in the factory. There was only enough money for me to spend on my basic needs, and the rest I would send back home. This meant that my family was able to live a more regular life and the children were able to stay in school”.

Putul is one among the many women who have migrated in an effort to maintain and enhance their economic as well as personal status. Her statement provides a glimpse of how safe migration and non-exploitative environment can greatly bring about positive outcomes. Putul, thanks to her resilience, has been able to contribute as an economic actor, despite the numerous challenges that she faced as a woman migrant.

Existing research has generally focused on the vulnerabilities and challenges of women during the migration process, such as, “long working hours, degrading work conditions and poor living conditions. They are also largely invisible from public purview and thus susceptible to exploitation and/ or physical and sexual violence” (Timothy, R. and S.K. Sashikumar et al). However, there is hardly any recognition or available data on the role of women as economic actors, who are contributing to family incomes and well-being. The sheer number of international women migrants today, however, should make it impossible to ignore their role and contribution.

The task of making migration safe and non-exploitative is a complex one, requiring coordinated responses from various stakeholders. The EMPHASIS project of CARE has demonstrated that many of these can be positively impacted upon, within a short period of time, and through simple strategies.

In Delhi, the project worked with international women migrants, who were engaged in the domestic sector. The project informed them about their rights as workers, set up platforms for discussion with employers and strengthened formation of solidarity groups. These women migrants were able to increase their monthly wages from $30 to $65 over a period of 12 months (walker, Bohidar & Devkota) Thus they were able to remit more money home.

Similarly, the project worked with banks and money remittance companies by sensitizing them to the needs and issues of the migrants and as well as facilitated women solidarity groups to engage with them. As a result, over 700 families at source and destination locations opened bank accounts for the first time. In the Achham and Kanchanpur districts of Nepal, 50% of 494 women surveyed in 2013 had opened accounts and received remittances safely (Emphasis Project Data). This, in turn, gave women (who stayed at home) greater control over resources.

Thus women, whether as migrants or as spouses at home, are making significant contributions as economic actors; however, they still remain invisible. In order to ensure that they play a more active role , and are not exploited, focussed research on the contribution of women to household economy and well-being is vital. The research should concentrate not only on their role, but should highlight the gender disaggregated data on remittance flow. This will ensure increased participation of women migrants during policy making, and increase Government accountability to ensure a safer migration process, which is non-exploitative. We need to work together for the holistic programming for women migrants across the mobility continuum and throughout the migration cycle.