Bihar and India are at the cusp of achieving the elimination of Kala Azar through concerted efforts of the government, civil society organisations and local volunteers. One of the key strategies used to achieve this has been Indoor Residual Spray (IRS). However, in order to maximise the impact of IRS, it is imperative that the spray team visits every house and sprays the interiors thoroughly.

In 2017, the District Health Society of Muzaffarpur, Bihar with support from CARE India formed an all-woman squad. This was decided after careful consideration and analysis of the impediments faced by previous IRS teams, in terms of access to the interiors of homes. This squad had distinct advantage over a male squad because of their quick connect with women in households, and subsequent access to inner corners of homes, like the worship room which are usually off-limits for men outside the family. 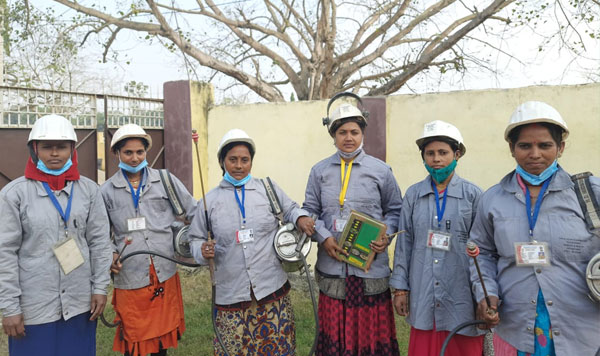 Hence, an unusual and pleasant sight it is to behold women carrying heavy hand-compression pumps on their backs and riding bicycles to distant villages in the Kurhani Block of Muzaffarpur. However, this did not come easy. It required a steady struggle against patriarchal norms about women stepping out of their homes to work, work that required heavy lifting and travelling, stereotypically viewed as a man’s domain.Not only does effective IRS require soft skills, knowledge about the disease and its epidemiology, and the ability to communicate the importance of IRS, it also involves immense psychological and social preparation by the squad of women. It takes courage to shed traditional clothes like the saree for a salwar kurta that allows for better mobility; courage to learn how to ride a bicycle and travel to distant villages to conduct the spraying. While the health department technically trained these women to operate the equipment, handle the spray nozzle, and more, but being able to come out of the confines of their homes to work, has taken substantial efforts to convince husbands, in laws and society as a whole.

“I wanted to work and become financially independent. When I learnt about the openings for the IRS programme, I saw it as an opportunity from God. I applied and luckily, was employed. CARE India has supported us all through the process, training and hand holding me whenever needed,” shares Sharda Bharti, the Superior Field worker (SFW) who leads a team of five women workers, part of the squad conducting IRS in the hinterlands of Muzaffarpur district in Bihar. 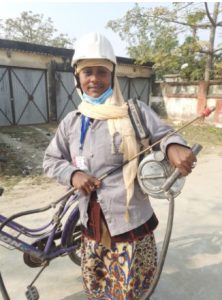 Veena Devi, a 40-year-old Field Worker (FW) says, “I remember the day when I had to seek permission from my in laws and husband to wear salwar kurta and go to work on a bicycle. My in laws were furious and told me off saying that people in the village would look down on their family if she went around wearing those clothes and riding a bicycle before the men of the village. But, I was determined. And so, against all odds, I managed to start my work, while dealing with all the negativity at home and the neighbourhood.” She further adds, “The sheer sense of mobility and freedom was so empowering when I first rode my bicycle to work, that I can’t express myself in words.”

Hiring women to do the job of conducting the IRS has proved to be fruitful. Sanjeev Kumar, Block Coordinator, CARE India tells of how there is almost no refusal or partially sprayed house in the block since this squad has started working. “Their skills are distinct not only in spraying effectively but in convincing people that every inch of the inner walls of their houses need to be sprayed. They have also raised awareness about disease symptoms, and identified suspect cases and referred them for diagnosis,” he adds.

Sanjay Ranjan, Basic Health Inspector/IRS Camp In charge, PHC Kurhani declares this initiative to be one of its kind in India, one and other states are also trying to replicate and implement in order to achieve complete IRS. He feels grateful to CARE India for supporting the district administration in the onboarding and training the women squad for IRS. ” These women are setting an example for other women in the country, that once motivated, women can move mountains,” chuckles Ranjan.

With one bold move, the women IRS squad has achieved two things – taking IRS indoors and becoming empowered, personally and socially. This intervention has also helped them combat many contributory factors for neglected tropical diseases. The additional income at home has enabled them to send their children to school, getting their walls plastered to eliminate any chances of infection in their own homes, seeking timely care, etc.

Encouraged by the success of this experiment, the government is considering forming many more such squads.

About the Programme: Elimination of Kala Azar is a major national health priority that CARE India is working on. Among the components of the programme, the organisation supports Indoor Residual Spray (IRS) for vector control. The activities range from help in preparing the micro-plan to squad training, supervision, monitoring and evaluation of IRS.

In 2022, for International Women’s Day (IWD), the UN has adopted the theme ‘Gender equality today for a sustainable tomorrow’, to celebrate the tremendous efforts by women and girls around the world in shaping a more equal future and recovery from the COVID-19 pandemic.