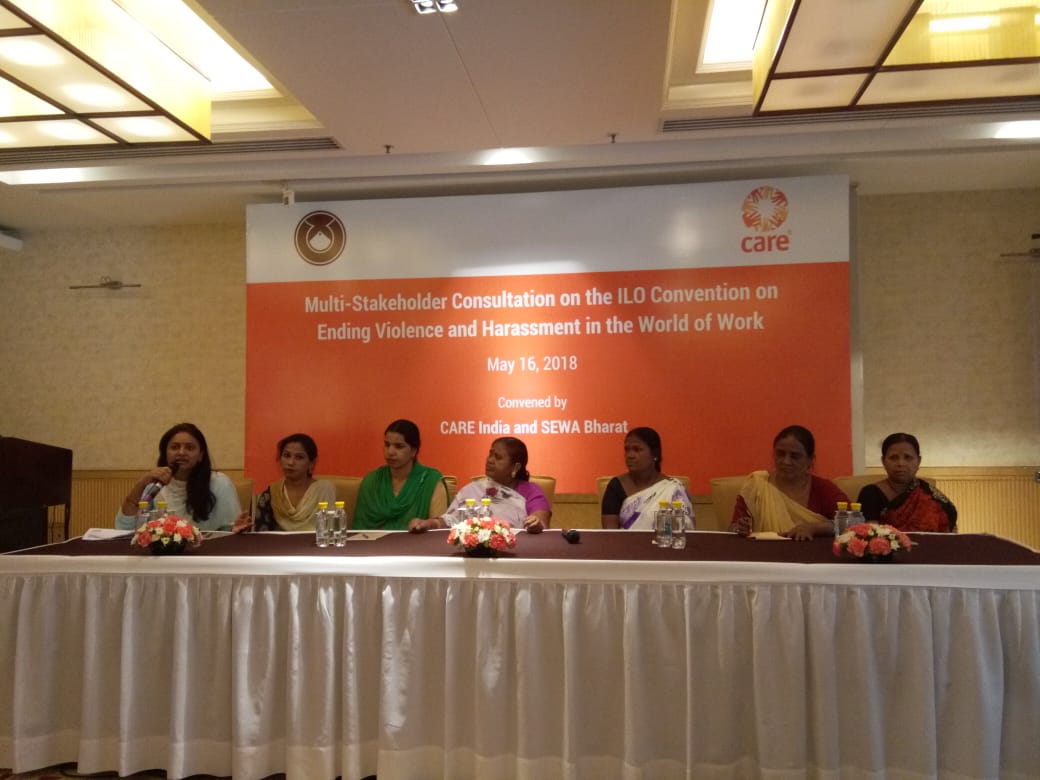 The drudgery of Gender-Based Violence and its effect on the society, especially in the lives of women involved in the informal sector with limited representation is immense. They often fall prey to discrimination and various forms of atrocities at their workplace. With an increase in violence over the last few decades, it has become increasingly significant to address these issues and root them out from the society. CARE India alongside SEWA Bharat organized a multi-stakeholder consultation on the recently published Yellow report by the International Labor Organization(ILO) Convention tackling violence and harassment in the world of work, especially focusing on the needs of women engaged in the unorganized economy. These women who work as home-based, domestic workers and street vendors, etc. are exploited through lower wages, harder work and familial and societal responsibilities. Globally, CARE aims to support women’s economic empowerment through the promotion of dignified work. In Asia, CARE’s Dignified Work — Impact Growth Strategy (DW-IGS) aims to tackle major global injustices where CARE can achieve impact at scale by working across multiple countries with the shared theory of change.

The consultation held was in consonance with the recent proposed global agreement to counter gender-based violence to involve the further step towards achieving the envisaged outcomes in support of the ILO Convention ahead of the International Labor Conference where the potential convention on ending violence and harassment at work will be debated for the first time. This ILO convention would require the governments to pursue an integrated approach to address violence and harassment in the world of work delineating responsibilities for public and private employers, workers and their respective organization, and joint strategies and collaboration.

The key objective of the multi-stakeholder meet was to encourage the multifarious conversations with government and various organizations but approach holistic progress in the development of these policies by involving the community members who had been subject to such violence. These frontrunners, who shared their voices about the cruelty which ranged from their birth to earning a living, being subjected to harassment not only from their employers but prejudiced from the society because they were from the marginalized, set the momentum for the consultation. The event began with an assessment of the need of the hour in the wake of inflicted violence on women which stems from the power relations and the hierarchy of social positions. The attention was drawn to carry the efforts to build a more comprehensive inclusion of the civil society alongside the various government and non-government organizations. It was followed with an analysis of the Yellow Paper which involved in understanding the proposition of various instruments to reduce violence in the workplaces and broadening the definition of workers and work under the purview of International Labor Organization Report so that they could seek redressal under the same.

This further translated in the Panel Discussion to solicit support and leadership from among women workers and their organizations and other stakeholders to attain full employment and seek for protection around income and social welfare-schemes for women were discussed. Headed by Shalini Sinha (Women in Informal Employment: Organizing and Globalizing) and including Miranda Frajerman (International Labor Organization), Jahanvi Dave (Homenet South Asia), Ankita Upreti (SEWA Bharat) and Gouri Choudhury(Action India), these pioneers in the field of women and human rights, discussed on various points ranging from vulnerability of diverse people engaged in different workforce to amplifying the intensity of the struggle by collective cooperation, from global campaigns to elimination the discrimination at grassroots level by involving them in the panchayats.

These suggestions were incorporated with the feedback from various other members for policy formulations. The conclusions based on the several ways to address gender-based discrimination and cruelty will be consolidated as a consultation report and further sent to key stakeholders and representatives to be set in motion at the International Labor Conference, Geneva this June’2018.