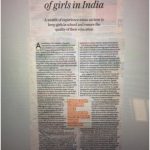 According to the ministry of human resource development (MHRD), 62.1 million) children are out of school in India. The 2011 Census estimated the figure at 84 million—nearly 20% of the age group covered under the Right to Education (RTE) Act. At this stage, traditional gender norms push girls into helping with household chores and sibling care, leading to irregular attendance that eventually results in dropouts. Early marriage, lack of safety in schools and low aspirations related to girls’ education also lead to them dropping out.

Additional problems arise when the girl reaches secondary education. As the recent Annual Survey of Education Report (Aser) 2017 findings suggest, while on average the difference between enrolment levels of boys and girls at age 14 are declining, by 18, when the state doesn’t enforce compulsory education through the RTE Act, 32% girls are not enrolled—compared to 28% boys. Bridging mechanisms for out-of-school children exist at the elementary stage but are absent for secondary education. Hence girls find it difficult to re-enter education once they have dropped out.