The project is funded by the Coca-Cola Foundation and Shapoorji Pallonji Foundation. 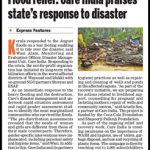 KOCHI: Kerala responded to the August floods on a war footing enabling it to tide over the disaster, said Wasi Alam, Monitoring and Evaluation Officer, Disaster Management Unit, CARE India. Responding to the crisis, the not-for-profit organisation has initiated its long-term rehabilitation efforts in the worst-affected districts of Wayanad and Idukki with on-ground NGO partners Shreyas and ESAF.

As an immediate response to the heavy flooding and the destruction, Care’s disaster management unit undertook rapid situation assessment and rapid gender assessment studies to identify the most marginalised communities who survived the floods. “The pre-distribution assessments revealed that the needs of women and girls are different from those of their male counterparts.

Therefore, gender-specific interventions were implemented, including personal safety and hygiene items,” said Wasi. In addition to this, Care India and its partners also capacitated 30 community women leaders in WASH (water sanitation and hygiene) practices as well as repairing and cleaning of wells and ponds in the affected regions.

“As part of the recovery initiative, we are preparing for actions related to livelihood support, counselling for pregnant and lactating mothers, repair of wells and community centres,” said Arushi Sen, a partner at Care India.

The project is funded by the Coca-Cola Foundation and Shapoorji Pallonji Foundation.

As part of the ongoing relief and recovery work, Care India is creating awareness on the importance of WASH and hygiene, use of toilets, garbage disposal, and use and recycling of plastic items. The campaign is directly reaching out to 2,000 school children and 26,000 villagers in Idukki and Wayanad.

This article appeared in the New Indian Express on November 28, 2018