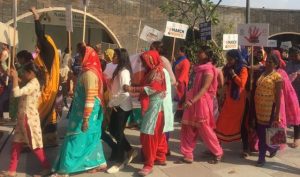 This march was part of a larger campaign organised by CARE India and PAHAL, two non-profit organisations working to bring an end to gender-based violence. The march was flagged off by prominent personalities like Avijit Dutt, filmmaker, theatre director and writer, Hrishitaa Bhatt, film actor and social activist, Suneeta Dhar, Advisor at Jagori.

During her address Madhu Deshmukh, CEO, CARE India said, “Harassment, exploitation and violence against women in public areas and workplaces are highly prevalent in our society, and patriarchy and crimes against the girls and women go hand in hand. It is important for us to sensitize women, as well as men, at all community levels to ensure safety and dignity of women in the workplace as well as at home.”

#March4Women 2019 was launched on March 8, to commemorate International Women’s Day. This year’s campaign focusses on spreading awareness about the International Labour Organisation’s Convention on Violence and Harassment in the World of Work.

The week-long pre-event awareness activities included discussions and dialogues, street plays and other engagement activities on gender-based violence in the word of work were conducted across Delhi for women in prisons, domestic workers, construction workers and trade unions.

The main event, organised at Janakpuri’s Dilli Haat, today, included talks, panel discussions, theatre and cultural performances, calling for stronger policies and action on preventing harassment in the world of work and violence against women.

A panel discussion focussed on issues of violence and harassment in the world of work, despite India having enacted the Sexual Harassment of Women at Workplace (Prevention, Prohibition and Redressal) law in 2013.

Hrishitaa Bhatt, CARE India’s Brand Influencer took the stage and shared her experiences regarding facing harassment in the world of work. “As a woman, I believe I have a lot to do for the betterment of the women community and make it a better place for them to live a dignified life. Believe yourself because everyone is equal for nature,” she said.

CSR Journal published their coverage of #March4Women on March 19