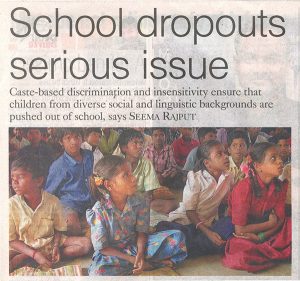 There are 6.21 crore children out of school in India according to the Ministry of Human Resource Development’s 2014 Educational Statistic. Report. However, figures derived from the 2011 Census are much higher. Even after seven years of the Right to Education Act 2009 that commits India to universal enrolment and’ retention of all children, a state like Uttar Pradesh still lacks a definition for school dropout. States that have a definition, lack the mechanism to identify those at risk of dropping out. Even with these data gaps, the dropout rate in India is 19.8 per cent and 36.3 percent at primary and elementary levels respectively. The highest proportion of drop outs at elementary level consists Dalits and Adivasis 38.8 per cent and 48.2 per cent respectively. This reflects India’s unequal education system where poorest quality of schools are provided to India’s poor, and where caste- based discrimination and insensitivity ensure that children from diverse social and linguistic backgrounds are pushed out of school.