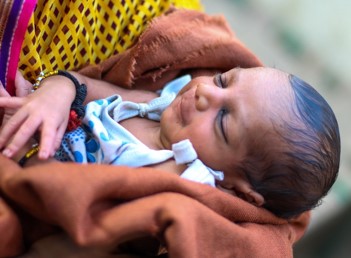 About 7.5 lakh newborn babies die every year in India, the highest for any country in the world. The first 28 days in the lives of newborn babies, also known as the neonatal period, are the most precarious days, carrying the highest risk of death. Yet, their health did not receive the commensurate attention, till a decade ago. As a result, the neonatal mortality rate (NMR) across the world, including India, has witnessed a slow decline. In India, though Bihar has witnessed a steady decline in NMR in recent years, it accounts for the second highest number of neonatal deaths in India.

A problem of such a large scale required a holistic programme covering enhancements in technical know-how regarding neonatal care, community sensitisation and strengthen the effectiveness of the government’s ICDS (Integrated Child Development Services) and health sector programmes.

Our interventions were initially implemented in eight districts (reaching approximately 28 million people). In 2014, the outcomes of programme implementation over 3 years showed promising results, hence it was up-scaled to all 38 districts of Bihar.

In addition to providing direct technical assistance at frontline operational levels, in order to ensure sustainable change, our programme implementation is based on: Improving public health leadership and managerial skills; sharpening focus on outcomes and gaining ability to use data and be driven by evidence and strengthened internal accountability; and strengthening core systems within the programme to provide an enabling environment for effective implementation of Reproductive, Maternal, Neonatal, and Child Health and Nutrition (RMNCHN) interventions.

The health and well-being of weak newborn babies is being monitored including mechanisms of mentoring, supervising and supporting frontline workers (FLWs) to focus on delivery services, robust name-based tracking systems, and logistics for ensuring supplies in the last mile.

The Ministry of Women and Child Development has pushed an ambitious plan to scale up our real-time monitoring app across the country, beginning with using World Bank assistance funds to provide smartphones to AWW in 8 states (including Bihar). We are supporting the roll-out of this initiative in all states.

As a means of promoting FLW-family interactions, besides home visits, a monthly VHSND platform was redesigned in association with a number of partner agencies. The primary purpose of the platform was to attract mothers and children to attend, and ensure availability of a range of supplies including nutritional supplements, contraceptives and ORS-Zn.