Meeting the glamour girl of India 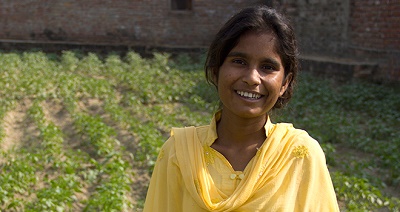 Shabnam met me in front of her small brick house with a big smile and tight hug – a stranger who quickly became a friend just by welcoming a dusty traveller. I had travelled for more than 10 hours to meet this young woman from a remote village in India who recently travelled around the world to New York City for the Glamour Women of the Year ceremony. Her home is a world away from Manhattan: animals roam peacefully down busy, unpaved roads which are lined with a mix of thatched houses and unfinished concrete buildings. I knew that my intolerable spoken Hindi would not be a problem between me and Shabnam; we both had received life changing educations and our similar experiences, I believed, should suffice for a flawless exchange of stories.

Inside Shabnam’s house, I sat for a little while on a traditional Indian bed made of wood and ropes, with no roof over my head, shooing away houseflies. Looking around I saw a small mud stove stood in one corner, a shelf with a bare minimum of cutleries in the other, and a dark passage that led to the remaining two or three rooms. Although Shabnam had prepared a delicious meal for me, we first toured her homestead and walked out of the house to a narrow road, avoiding the stares from curious neighbors, through a small plot where she and her family had planted some potatoes. Nearby, mustard flowers were blooming and sugarcane grows freely. 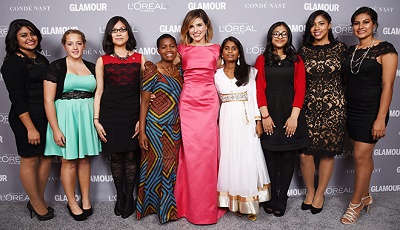 Against this humble backdrop, Shabnam spoke passionately about her visit to the US. She was fascinated with how the people she met loved and respected everyone (none of the young men she met even teased!), the interest they had in learning about her life, and, of course, touring the city. “Anyone can go to the US if they have money,” said Shabnam, “but it is the respect I received and the opportunity I had to be on a stage that made my trip special.”

Why did Shabnam go to New York for this event? A few years ago, she was a promising student at a KGBV school who was studying despite her families’ reservations about girls’ education. In addition to her strong academic performance, Shabnam excelled in the social learning aspects of the program and she told me how KGBV positively changed her life, particularly by teaching her to respect others, regardless of their backgrounds.

Shabnam has applied these learnings as a leader in her own village. While attending KGBV, she inspired around 15 other girls from the village to join her in school and she also saved money to help them buy books. Many of them are also now KGBV graduates and continuing their educations in secondary school.

Shabnam continues to speak up against the system of dowry, expectations that girls must stay at home and the belief that education ruins a girl. She dreams of becoming a teacher and opening a school in her village so she can help everyone get an education. I could not agree more with her when she told me that no one understands the value of education until they receive it.

Shabnam is hoping for further changes in her society: She is committed to a future with honest political leaders, and a community that has latrines, potable water, and that ensures that girls aren’t married until they are educated and in which boys are both expected and taught to behave themselves. If no such leader comes up, she is willing to take the challenge herself.

Once we returned home, she took me to her room, unpacked the gifts she received on her trip, fed me some sweets, and showed photos of the places she visited. She also proudly showed me the copy of Glamour magazine in which she is featured.

After just two hours with Shabnam, I felt as if we were old friends and I could both relate to her experience and be completely inspired by it. On my way back home, content and motivated, I could not help but feel as though I had left a bit of myself behind at her house.