The Story of Grit and Perseverance 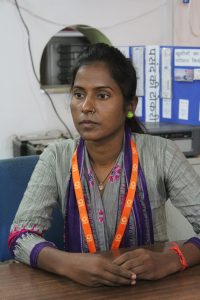 Twenty-one-year old Rajni has been a female facilitator trained on the subject of family planning, as part of the Zero and Low Parity Pilot (ZLPP) programme implemented by CARE India from 2018-2020, in Gaya and East Champaran districts of Bihar.

It is indeed marvelous that despite the numerous hardships, Rajni has managed to preserve her childlike curiosity and zest for life, which is also infectious. It is known that even as a child, she held the ability to persuade other children to engage in playing pranks with her. When she was still in primary school, her parents died. It did not take little Rajni long to realise that her three sisters and she would need to fend for themselves in order to survive, without expecting relatives to support them.

Through the Mahila Samakhya programme, run under the aegis of the Ministry of Human Resource Development, Rajni received the chance to complete her formal education, paving the way for her younger siblings to do the same. Besides academics, the education focused on sports and outdoor activities like karate. Rajni was already an exceptional student and soon she begun to excel in karate as well, earning a brown belt in no time.

On completing high school, she started teaching karate to young girls in different blocks, in order to support her household. It was a satisfying experience for her to empower young girls and equip them with self-defense skills, while earning an income. She did this for six years, but when the income started dwindling, she switched to participating in street plays in Patna, working part-time for local NGOs and the state cultural department.

Unfortunately, her income was sporadic and inconsistent. With family expenses rising and her sisters financially dependent on her, it became imperative to find a long-term solution. Incidentally, she ran into a friend working in the office of the Department of Health and Family Welfare in Patna and on learning more about her work, Rajni expressed interest in exploring a similar work opportunity. Shortly after, Rajni’s friend informed her about a vacancy at CARE India for a health project, and the eager young woman applied. Even though she had no prior experience in specialised family planning interventions, she was chosen because of her ability to meet challenges, adaptability and people skills, much needed for the role of a female facilitator.

However, nothing could have prepared Rajni for the mountain that lay ahead of her. For starters, she had no experience of interacting with men and wondered how she could break the barrier and get them to take her seriously and receive information about the ZLPP programme and its goals.

As expected, she met with resistance on her door-to-door visits to the homes of young couples, who were hesitant to openly discuss reproductive health and their concerns with regard to family planning, spacing, contraception and unmet needs. People viewed her with disdain and distrust, asking what business she had demanding answers about personal and taboo subjects. The walls built by men and their mothers made it extremely difficult to get through to young wives and break into their traditional conditioning. On several occasions she left without making much headway. These were devastating moments when she felt like an utter failure and considered resigning.

Then again, Rajni was no quitter. Blessed with a strong survival instinct, she decided to persevere. Absorbing inputs from the trainings that she and other female facilitators received from CARE, the young woman once again braced herself to make home visits, and this time, met with greater success. Gradually, people began to shed their inhibitions, ask questions, share stories and seek advice. Rajni felt both joyful and humbled because these people were trusting her with their private bedroom conversations.

Handholding from the CARE team and regular feedback sessions helped Rajni gain a better perspective. Once line lists were prepared, there was greater clarity in advance on the households to be visited, giving her time to prepare. This also laid out information about the status of the couple being visited – zero parity or one parity. Soon, couples started responding and began to look forward to these visits. Family elders too appreciated the facilitator’s presence and contribution.

Rajni then met another huge challenge – of convincing ASHAs to attend HSC meetings. It turned out to be tougher than she had thought. This is because they had a mental block about taking up family planning in their discussions with young women, and felt annoyed at being “chased”. It took a lot of cajoling to make them understand the purpose of ZLPP and their role in equipping young couples with correct information, so they could make the right family planning choices.

To help them conquer this apprehension, Rajni asked the ASHAs to accompany her on home visits. When they saw the zealous young woman in action, they started looking at the bigger picture. They realised that young couples would grow to rely on them for information and they would have to step in to fill the gaps and ensure continuity once ZLPP ended. It was important therefore, for them to learn how to integrate the topic of family planning, contraception, spacing and delayed pregnancy with more neutral subjects such as nutrition, sanitation, menstrual hygiene, sexually transmitted infections and correct use of different contraceptive methods.

Once the ASHAs were convinced and willing, they still urged Rajni to accompany them on their home visits. While there, Rajni let them take the lead, herself sitting back to observe. If they got stuck and needed to be “rescued”, she stepped in. After the meeting, the ASHAs would seek feedback on how they had fared and what could have been done differently to elicit a more positive response.

“Our tuning with the ASHAs was a plus point. Our work felt validated when an ASHA from a neighbouring block asked if she could be part of ZLPP,” shares Rajni happily.

In time, young couples started to feel comfortable and reassured, talking to the ASHA in confidence. Their elders felt at ease, seeing how the ASHAs lost no time in providing linkages and referrals. This encouraged them to bring in neighbours and other girls in the family to discuss these issues with the ASHAs.

“Home visits became a major success. Young brides and grooms felt reassured talking in confidence to someone they could trust. Many of them delayed their first pregnancy and an increasing number saw merit in spacing out children. The health of the young mother became a priority and men started granting women the freedom to choose when to have a child and what family planning method to use,” further adds the determined facilitator.

Rajni felt a tremendous sense of relief because she could now see that she had performed her role as a change agent, passing on the baton of family planning to the ASHAs who would carry on the work in the same spirit.

About the Programme: In 2018, CARE launch a first-of-its-kind intervention where CARE introduced gender and sexuality in family planning programme focusing on zero (couples with no children) and low parity couples (couples with one child). The decision was based on finding from Currently Married Women of Reproductive Age (CMWRA) study which indicated that use of contraceptives was low and unmet need for spacing methods had only marginally increased.

The pilot was started with three objectives:

In 2022, for International Women’s Day (IWD), the UN has adopted the theme ‘Gender equality today for a sustainable tomorrow’, to celebrate the tremendous efforts by women and girls around the world in shaping a more equal future and recovery from the COVID-19 pandemic.