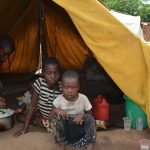 Christina Fachi a mother of five arrived at Bitilinyu two weeks ago after her village in Kasume was flooded. She lost her two huts, a granary and some livestock. “Although I am glad to be alive, I feel empty as I have lost everything that I worked for years,” she says. “My whole life’s work was swept away by the floods. I will have to start again from nothing.”

Nsanje, a district in the southern tip of Malawi, was ravaged by Cyclone Idai two weeks ago. Property, crops and livestock were swept away by raging floods.

Typically, the lowlands of Nsanje, one of the most fertile areas in Malawi, would be covered with a variety of crops ready to harvest this time of year. Instead, fields are currently inundated with knee-high muddy water. The flooding has left many families homeless and destitute.

More than 20 camps have been officially registered in the district to provide shelter for people whose houses were destroyed by the floods. Life in the camps is not easy.

The story of Bitilinyu camp

Bitilinyu, situated about 25 miles from Nsanje town, is one of the camps supported by CARE. The camp houses nearly 2,000 households. The majority of the people in the camp are women and children.

Christina Fachi, a mother of five arrived, at Bitilinyu two weeks ago after her village in Kasume was flooded. She lost her two huts, a granary and some livestock.

“Although I am glad to be alive, I feel empty as I have lost everything that I worked for years,” she says. “My whole life’s work was swept away by the floods. I will have to start again from nothing.”

Although Christina has a tent, which many of the residents at Bitilinyu don’t have, she misses her village and her home. “I miss my privacy,” she says. “I have two other families staying with me in the tent so it’s difficult to be alone with my children.”

Crowded tents and threat of diseases

Many tents at the camp house two to ten families. But the majority of people sleep under an open shed in the middle of the camp. When it rains, the shed floods, forcing the people to either stand the whole night or crowd into one corner.

“I came with my wife and three grandchildren, who are orphans, when our house was submerged by floods,” says Dimingu Nyoka, who estimates his age as 85. “Now we are sleeping in an open space. I am afraid that we may get sick from Malaria as there are many mosquitoes.”

Dimingu, a subsistence farmer, says he does not want to return to his village as he fears that floods may come again. “We had to come out from the roof as the whole house was under water,” he says. “We are old now and can’t manage this life of running away from floods every now and again.”

Most residents of Bilitinyu camp share Dimingu’s sentiments – they are afraid to go back to their villages. Many would prefer to resettle upland, but they can’t. If they were to relocate, they would not have a place to farm. Almost 80 percent of the affected families depend on farming for income and their livelihoods.

In the past, land was distributed free by chiefs to those who wanted to resettle. But now, things have changed.

“A small piece of land now costs 200,000 kwacha,” says Fatima Karo from Katandika village. Her home was also destroyed by the floods. “This is a big challenge for me as I can’t manage such a large sum. Otherwise, I would love to stay and start a new life here.”

A shot in the arm

Beyond the lack of tents, Bitilinyu only has one water point, which is also used by the host community. As many staying at the camp lost all they had, including kitchen utensils, fetching water from the single water source, a challenging situation on its own, was even more difficult.

To ease the burden, CARE, with funding from the U.S. Agency for International Development (USAID), recently distributed water and sanitation equipment to more than 1,500 families staying at Bitilinyu. Each family received a water bucket, chlorine for water purification and plastic sheets for roofing temporary shelters.

“CARE is planning to do more distributions in the coming weeks so that all families have somewhere to store their water,” says Mwangitama Chavula, Water and Sanitation Coordinator for CARE in Nsanje. “Our main focus now is to make sure that we don’t have any disease outbreaks in the camp as we are working to address some of the challenges the people are facing.”

According to Mwangitama, the need is still huge as more people are moving into the camp fearing the threat of more storms and floods. “Flooding normally happens in January, but this year, it happened in March. The people are not so sure if they should return to their homes or wait until the rainy season is completely over. We need more support so that we can help those already in the camps and new arrivals who are flocking in,” she says.