An whirlwind of excitemen

The initiative was to project the work done by ASHAs in general and share the ongoing innovations in Bihar, with regard to field level health workers. We were going to be a part of a program called “Swastha Bharat” (Healthy India), which was to be hosted by one of our members from CARE India, Amit Arora. This show, which is aired thrice a week at 7:30 pm on DD National, turned out to be quite an affair! There are lakhs of Accredited Social Health Activists (ASHAs) in Bihar. I had to collect the profiles of those ASHAs from each district of Bihar who are associated with CARE India, coordinate with my colleagues in CARE for the ID proofs of those ASHAs and then make sure they reach Patna on time. All this took a lot of time and energy. And I enjoyed every second of it! Before our journey started, I logged on to check the train status, only to know that our train to Delhi was running 9 hours late. We would not be able to reach Delhi in time for the recording. And then something quite exciting happened. We got our flight tickets done! I had never felt happier traveling by air, as it was the first flight journey for most of the ASHA workers. From the security checks to tying their seat belts was an exhilarating experience in itself! Traveling with them, I suddenly realized that the things that we take for granted like picking luggage from the conveyor belt, opening a can of juice, making tea from an electric kettle, using a lift could be such thrilling moments for others. It was a huge step in their lives and they were taking it on their own, without their husbands directing them. Thanks to a packed schedule, which comprised of shooting for both Aakashvani and Doordarshan, the trip was a whirlwind of excitement! Going to recording studios, watching the anchor woman live, huge camera sets in the studio overwhelmed me quite a bit. I thanked the ASHAs for giving me this opportunity. Taking them around Delhi was like being a guide to a group of excited kids. They wanted to see everything. We went to see the Lotus temple, Qutub Minar and India gate. Our tour around Delhi was much more than just exploring historical places; it was a chance for the ASHAs to explore a new world! They looked at the shops, houses and especially, the women around them. One of them exclaimed, “They seem to have come out directly from the movies”. On our way back, we started for the railway station from the hotel in the morning to catch the 8:30 am train. As we reached the station, I could not see our train number flashing. At 8:10 am we reached the New Delhi Railway station and was informed that our train starts from Old Delhi Railway station at 8:30. Jumping into taxis, we dashed for Old Delhi. I was quite in hysterics and kept praying that the train gets late by at least 10 minutes. Skirting the traffic, we ran towards the platform. After so much commotion, we were informed that the train was half an hour late. A bewildered group of ASHAs and I laughed hysterically! As we said our goodbyes, one of the ASHAs with tears in her eyes said, “While getting ready for Delhi, we thought we would miss our families on this trip. But now we are sure we would miss you more than we missed our families!” And the memories of the unlimited fun lived on…… 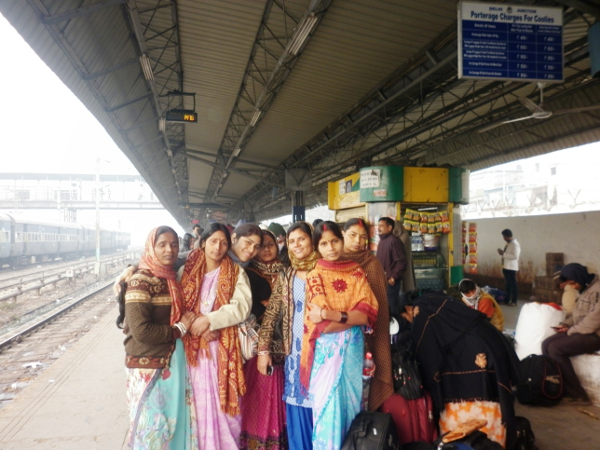