A common farmer initiates a paradigm shift in gender stereotypes 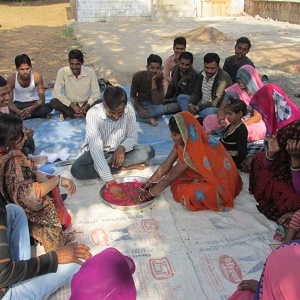 Raju Mishra with his wife in gender meeting in his village

Breaking gender stereotypes, Raju Mishra, a common farmer from Madhya Pradesh’s Chhaikua village has become a role model for the entire community. He has almost single-handedly managed to change perceptions and attitudes towards gender inequities in respect of workload sharing and household chores in the village.

Father of three young children, Raju was content with his life until he was asked to participate in a gender meeting by CARE India’s Madhya Pradesh Nutrition Project’s (MPNP) frontline worker, Nidhi. At first, Raju agreed to come for the meeting, a little reluctantly. At the time, he was hardly aware that this meeting would would change his life forever.

Chhaikua is one of the villages in Madhya Pradesh where CARE India’s MPNP team is working towards reducing malnutrition among children from 0- 5 years of age. A year ago, CARE India conducted a gender analysis in the village and discovered that the basic causes of malnutrition in the region were rooted in gender bias and inequities. To address this, the team initiated a series of reflective sessions with couples. It was first of these meetings that Raju attended, where participants were sensitized on how gender inequity related to workload on women in rural settings affects their health.

One of the major tasks for women in such remotely located villages is fetching water for everyday use. Usually, women tend to do this in the mornings, even before the breakfast time. Raju decided to change the situation in his own home, and the very next day he headed to the village hand pump to fetch water, with an empty stomach.

The moment he lifted the filled bucket, he experienced severe stomach ache. For the whole day he was restless and had to finally consult the local doctors for some relief. It took Raju almost three-four days of rest along with the prescribed medicines, to recover properly.

“That was the moment when I realized that women suffer from the same pain every day and yet they continue working all day in that condition, because they don’t have any options. It was this realization which led me to start helping my wife in her work, starting by fetching water every morning so that the condition of at least one woman, changes.”

The happy couple- Raju with his wife

Soon, Raju made it a daily practice to fetch water from the village hand pump. Other men in the community found this quite amusing and he was often ridiculed for doing, what was considered a woman’s work. Undeterred, Raju started lending a helping hand in other household chores and taking care of his children as well. He also decided to motivate other men and started counseling them by sharing his own story during the gender meetings.

At first nobody payed attention, but then slowly some people started listening to him. Raju encouraged them and continued his efforts to motivate and counsel more and more men in the village. As a result, some men started in his footsteps and began helping the women in their everyday work.

Now-a-days, men fetching water in the village has become a common sight. Raju’s wife Umani is also all praises for him as their relationship has also evolved immensely.

Raju’s friend Naresh Mishra said, “Raju has helped us change our attitudes towards women and household chores. We now realize how lending a hand to even a chore like fetching water can reduce the overall burden on women. Women in our families are not over exerted and are healthier and happier “.

CARE India also documented Raju’s journey in a short film on the Gender Transformative Change interventions in MPNP that has further inspired many more couples in the region.