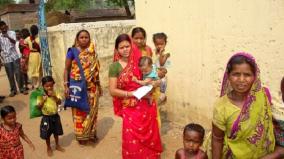 Kotshila is a backward village at the Noahatu Gram Panchayat in Jhalda-II block of Purulia district, West Bengal. In this village, the people are mostly engaged as agricultural laborers or are working in the local unorganised sector, such as the bidi (local cigarette) industry.

People in Kotsila are extremely poor. It was noticed that they were not being able to avail many of the Government services provided to them. CARE India initiated a ‘community monitoring process’, with close involvement of the SHGs in the Jhalda II Block under the CHCMI project.

Prior to this effort, outreach camps were being organised in local religious premises or in the houses of some of the influential persons of the village. This had created a religious rift, thus barring a certain section of the population from availing the services.

The CHMI project facilitated the organized camps in the form of Village Health Nutrition Days (VHND), which were held on the 3rd and 4th Saturdays on the premises of the Primary School in the village.

I visited one of these VHND days. It was an amazing experience for me to see the active participation by the field level health activists, such as the Auxillary Nurses Midwives, Anganwadi Workers, ASHAs, SHG members and the locally elected members of the Gram Panchayat. I noticed that the children under-three were being weighed and the records were then documented in the registers maintained by the SHG. I also went along with the SHGs on home visits to get the pregnant women and children who had missed some doses from the immunisation schedule, checked on a priority basis. I was happy to see that the CHMI workers were able to motivate them to come for the VHND.