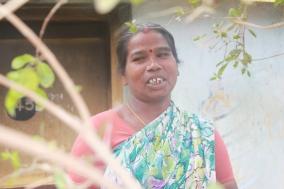 Srivakkaramari is a Dalit settlement of 300 poor families, in the Srimushnam block. This block is endowed with natural resources. However the Dalit population have been pushed to the brink of the village, where the land is less fertile. They are mostly agricultural labourers or are working in the informal sector.

Rani was a landless labourer from the Dalit community. She and her husband often had to live a hand to mouth existence as their income was very low and her husband wasted most of it on alcohol. The employment opportunities here were also seasonal and highly uncertain. And in the era of mechanization, even this meagre opportunity in harvesting was being taken away.

In this village, women labourers faced severe gender discrimination in wages, as they were not receiving even half of what their husbands were getting for the same hours of daily work. In this scenario, Rani had entangled herself in loans with very high interest rates from the local loan sharks.

Today, Rani is one among the 32400 women, who have been empowered through CARE India’s micro finance initiative, ‘Banking on Change’ programme. This is a global financial inclusion initiative supported by Barclays Bank and implemented by CARE and Plan in seven countries across the globe.

With support of the CARE team and the SHG members, Rani started working at a dairy farm, where within six months she was able to earn Rs 40,000. With animal husbandry being the main work in a dairy, the family has engaged intensively in its work, with it becoming the main source of income now.

Dairying has given an opportunity for Rani to influence gender transformation within her household. Her husband has started participating in the domestic activities, which are traditionally considered to be a ‘women’s job’. This has also helped Rani extricate her husband from the pernicious hold of alcoholism. As their participation in market and institutions have increased, there has been an enhancement in their self- respect and social mobility among the community.