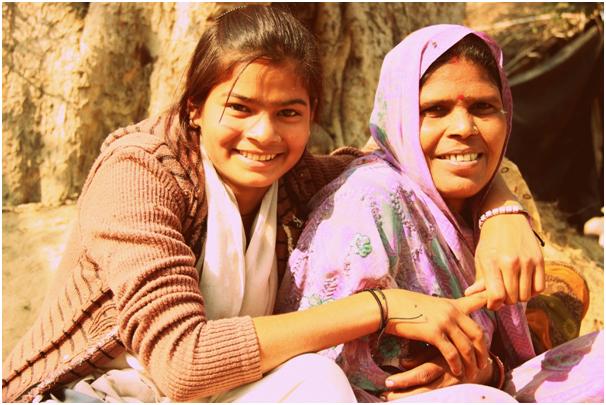 4th May, 2015. Portraying a shy personality when she meets me for the first time, sixteen year old Sanvli Devi is actually a rather brave, confident young girl filled with determination and courage to stand up for her rights.

Sanvli’s school is about 4 kilometres away from her village Richli (Andora) in Uttar Pradesh and she would walk this distance for lack of any mode of transportation available to her. But when she spotted the boys from the village and even a few girls cycling to the school, she decided that she would also get a bicycle for herself instead of walking all the way!

But getting what she wanted wouldn’t be too easy since her parents were not very willing especially because of their financial circumstances. Being the strong willed girl that Sanvli is, she managed to cajole her parents until they gave in and bought her a bicycle which remains her prized possession today.

Sanvli says “Upon learning about gender equality from CARE ‘s Join My Village’s adolescent girls meetings, I thought other boys in the village study and go to school in a bicycle so why shouldn’t I, and so I used this argument among other things to convince my parents.”

In the village Sanvli is considered to be of marriageable age and so her mother thinks she ought to be married off. Her mother tells me “I didn’t want her to study further but I had to agree eventually because of her stubbornness.”

Sanvli gives credit to Join My Village’s adolescent girls meetings through which she has become more independent, confident and aware of her rights. Because of her determination, she has managed to get what she wanted and what was right for her.

Her mother says “Now my job is to get her educated and let her become whatever she wants.” Sanvli tells me “I want to become a teacher and teach other poor children.” To this I responded to her saying “Then why not start your teacher training now itself. You could begin with your mother and the ladies from the neighbourhood. Age is not a barrier to education after all, so why not give them the chance to learn.” Sometimes a little push is all we need.

Sanvli’s mother, who can only put her signature on paper and write nothing more as of today, is the first student to enrol herself in Sanvli’s class, very happily! Sanvli promised to start teaching her mother and four to five other women in the village. “This is my new dream for the new year now” said Sanvli excitedly.

As I bid goodbye to her I reminded her to keep her promise and that I would be back in a few months to see how her classes are going.