New Hopes at the Dawn of a New Year 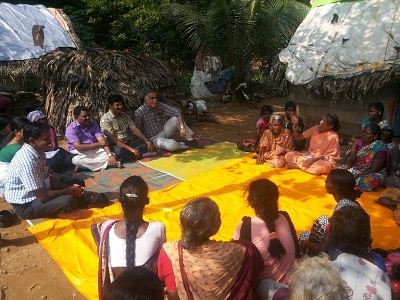 As the New Year dawned with hope and vigour, the remnants of the dreadful memories around the unprecedented floods, still lingered with most communities across Kancheepuram and Cuddalore districts of Tamil Nadu that I visited last week. Yet, I was able to see remarkable valour and determination in the locals to bounce back to normalcy. These are the poorest communities from the most marginalized groups- the ‘Irulas’ who are Adivasis, a scheduled tribe community.

People from these communities are largely dependent on wage labour in agriculture, and have very meagre means to make both ends meet. Irulas live on the fringes of the village. Literacy amongst them is low, and very few government welfare programs reach them. They are considered to be migrants who sell snake skin to make a living. They are now gradually finding feet in alternative livelihoods such as wage employment.

Tamil Nadu floods caused by torrential rains, were described as a ‘calamity of severe nature’. They led to loss of 470 lives, catastrophe and mass damage to public and private infrastructure, property, and assets. This in turn resulted in loss of livelihoods for hundreds of people. Severely affected geographies included Chennai, Cuddalore, Kancheepuram, Thiruvallur, Tuticorin and Thirunelveli. As per official estimates 30.42 lakh huts were affected, of which 4.93 lakh huts were completely or partially damaged. Besides that 3.82 lakh hectares of crop is affected and nearly a lakh of livestock died. The Government of Tamil Nadu pressed its entire machinery for rescue and relief operations to compensate for the loss of life, property, and livelihoods.

CARE has responded by reaching out to more than 2500 poor households with relief support and has plans to reach out to many more. CARE believes in ‘building back safer’, a mandate which improves the lives and livelihoods of the community to a level which is better than the condition they were in before the disaster hit them.  During an interaction with the affected communities, I was overwhelmed to hear the gratitude expressed towards CARE, for being at the forefront of extending relief to the most excluded and unreached. I also realized that they require support for retrieving lost livelihoods.

My discussions with the community threw light on questions like how should the loss of livelihoods be made up, and what steps should be taken to help communities become more resilient, and equip them to mitigate risks. This visit also brought me closer to the problems these communities face especially in terms of receiving their entitlements and basic amenities. My experience on this trip has made me more perceptive about how we can contribute towards building stronger and resilient communities.

May the new year bring with it renewed strength and vigour to face natures vicissitudes.