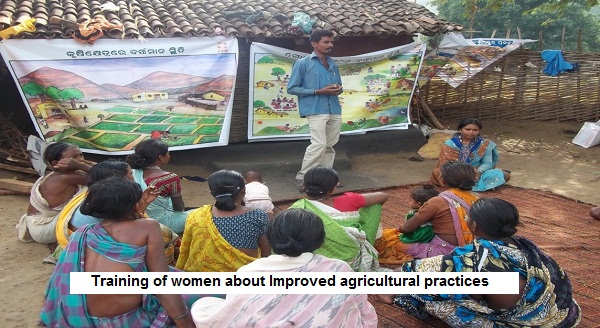 Tentulipadar is an un-surveyed village in Karlapat Sanctuary in Kalahandi, Odisha. Prior to declaration of Karlapat as a Sanctuary in 1992, there were seven tribal families residing in Tentulipadar, all of whom were dependent on agriculture and NTFPs for income and survival. These tribals claim to have settled in this region even before Independence. In 2012, four out of the seven households were allotted homestead land measuring 4 decimal (0.04 acre) under Vasundhara scheme of State Government in Lainiguda village, 7 km away from Tentulipadar. Since Karlapat is a Sanctuary, the local Forest Department was keen to relocate the families in Tentulipadar out of the forest. However, the families were not willing to relocate, leaving behind their habitation and fertile agricultural lands. The people lived under a constant threat of being denied to collect Non-Timber Forest Produces, under the pretext of it being “illegal” collection from a reserved forest area.

When CARE started Pathways interventions in the village in 2013, the Forest Rights Committee  (FRC) of Tentulipadar was hardly functional. After the FRC was strengthened and the community, especially women, were sensitized on application of habitation, and usufruct rights related provisions of the Act by CARE India, the FRC members visited the office of Divisional Forest Officer (DFO) and District Collector. The purpose of this visit was to insist that the tribal households could decline eviction, and continue with their lives and livelihoods in their village Tentulipadar, as per the Forest Rights Act (FRA) 2006.

As part of the FRA intervention under Pathways, the Forest Rights Facilitator started trainings on FRA, and gave technical assistance to the FRC on scientific claim procedure, and provided handholding support for evidence collection as per FRA Rules. With this technical assistance, the FRC of Tentulipadar submitted seven IFR claim forms including the Community Rights claim form “B” at Sub-Divisional Level Committee (SDLC) in Bhawanipatna.

In between, the FRC was promoted to start regular meetings and communication with the supportive officials of ITDA. As a result of continuous interaction and follow-up support by the facilitator, female members of FRC joined other representatives and undertook regular follow ups due to which the Tahasildar, South Division (Forest Department) and the joint team of Revenue Inspector, Forester & Welfare Extension Officer made visits to the village to ensure timely completion of field verification for individual land rights in the presence of FRC members.

As on date, the claims for individual land rights have been forwarded to the SDLC for review and the subsequent forwarding to the District Level Committee (DLC) for final approval. Women of Tentulipadar say, “… this has been a journey full of challenges yet a great learning one”. They are eagerly waiting for the final approval which will ensure their rights over their land and forest resource. Pathways has also been strengthening women’s Self-Help Groups in the village, which are helping women to save regularly, build assets, and meet their credits needs both for social and agricultural activities. Women in Tentulipadar and their spouses also actively participate in agricultural trainings and orientations organized under Pathways initiative, as they believe that the way forward after realization of their land rights is to secure their incomes through sustainable agriculture.

Forest Rights Act is a revolutionary piece of legislation which presents immense possibilities for tribals and other forest dwellers to gain recognition and respect for their conservation initiatives and customary rights. However, the efficacy of this legal framework depends largely on how the Act, particularly its provisions on community rights, is perceived and implemented by the government agencies. The ITDA in Kandhamal has been proactive and supportive in this process, working with CARE India on FRA implementation to help the communities claim and realise their rights, which is just a beginning, nevertheless vital for women’s true economic empowerment.