A candle in the darkness 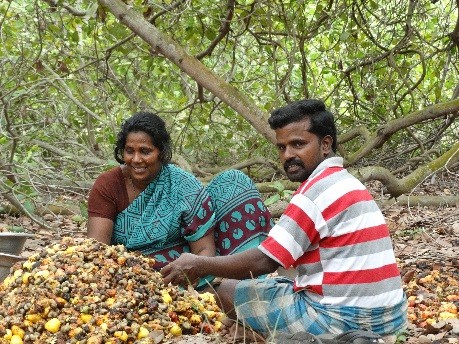 Usha Karthikeyan of Mutharasankuppam village in Cuddalore, Tamilnadu has been involved in a small scale cashew processing business for the past 10 years. Before she got married, she knew only about raw nuts and had very little knowledge about cashew processing. She and her husband did not have any property except the house they lived in. As they began their life together, she learned about cashew processing and started supporting her husband who was involved in buying de-shelled kernels and selling the graded nuts.

As their family grew and the pressures of business increased, Usha’s daily routine became increasingly gruelling. Usha started her day as early at 5 am with cleaning the house, and cooking for the family, after which she helped her two children to go to school. Post that, she completed pending household work until the workers reach the processing unit, after which, she got completely involved in business activities. In the evening, when the children returned from school, she gave them food, looked after them and returned to the cashew processing unit to complete her work. The night gave her little respite, having to complete more household chores.

Meanwhile, her husband would begin work around 7 am by going out to nearby villages to procure the kernels for processing. Then he would help his wife to process the nuts, and once the processing was over, he would carry the final kernels to the exporter for sale.

Without any support from her husband, she expressed her concern about being overworked and deteriorating health, and sought help from the Women Leadership in Small & Medium Enterprises (WLSME) group, which builds women leadership in the cashew growing and processing sector, and which fortunately she was part of.

The WLSME group facilitated counselling sessions with both spouses and she was asked to convey what she does throughout the day. On hearing the list of activities, Usha’s husband was shocked and was unable to speak. He was then asked in what way he can share her work, and he was made to understand the physical demand of her work as she had to stand long hours for the de-shelling activity. Today, Usha smilingly recounts how her husband has begun to help her by waking up early in the morning, assists her in sweeping and cleaning of the house, helps her in cooking, collecting water and getting their children ready for school. He also started helping her in the manual de-shelling of cashews. Now, Usha has the time to visit her relatives, and her husband has turned into a role model, who is willing to share their story with other men to support their women.

She is grateful for the support provided by the WLSE program for dispelling the looming darkness, and bringing the light back in her life.

CARE India’s WLSE program strengthens skills, capacities and capabilities of women to own and manage sustainable enterprises. It facilitates effective relationships among women entrepreneurs and promotes an enabling environment, and positive attitude and behaviour from family members, and other stakeholders.