Sargiguda girls step on the path of higher education 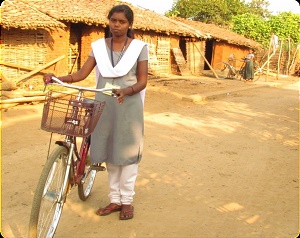 In Sargiguda village, located in Odisha’s Kalahandi district — where 48.12 percent of the population lives below the official poverty line, women have set out to secure the right to education for their girls. The women are now being motivated by a common dream — to push their children, especially girls, out of a life of illiteracy and poverty in a district where 40.78 percent of the population has no education. The women literacy rate is only 46.68 percent.

“We remained deprived of the benefits of education. But we want our daughters to be educated and progressive. That will make their life better,” says Baidehi Dandsena, mother of 16-year-old Mamita Dandsena, one of the first two girls from Sargiguda village to have entered college.  “They will be able to read and write. It will be helpful for their future,” adds Nrupati Dandsena, mother of Radane Dandsena, 16, the other girl from Sargiguda to have enrolled in a college.

But few years back, the perception of Baidehi and Nrupati towards the education of girls was totally different. Like many others in the community, the education of girls was never a priority due to the prevalent social and cultural barriers. Marriage of children is considered primary, and girls as young as 13 years are married off that discontinues their school education. Moreover, most of them do not see any value in pursuing an education.

Located at a distance of 13 km from the district headquarters of Bhawanipatna, Sargiguda village comprises 55 households and most them belong to the Gond tribe. The villagers have deep faith on their social culture and customs where role of women is limited only to domestic chores and others forms of labour. Family members never show much interest towards education and consider marriage as the biggest responsibility.

“Agriculture, collection of forest produces and daily-wage labour are major sources of livelihood for the community. Therefore, the burden of chores, both domestic and agricultural largely lies with girls and women,” says Surekha Nayak, the Anganwadi Worker in the village.

In addition, since colleges/institutes for higher education are located 13 kilometers away from the village, parents are usually hesitant to send their young daughters alone. Most of the girls in the village either drop out before or after completing matriculation. Conventional mindset of the community, need to work and earn early to support and early marriage continue to be the main hindrances for girls to continue their education.

It was not easy for girls like Mamita and Radane to challenge the conventional mindset and convince their parents who support a large family with their limited income.

“My parents did not allow me to study as I was engaged in domestic chores,” says Radane.  Mamita too nods agreeing to have faced similar situation with her parents.

This mindset gradually changed when the issue was discussed collectively in a forum. Awareness on the importance of girls’ education steadily increased with the initiation of CARE India’s Pathways project. Implemented with support from local NGO partner Jana Kalyan Sanstha (JKS), the project built on the vital roles that women play in a community and aimed to enhance their role and contribution to development and growth.

In September 2014, members of Self Help Groups (SHG) from Sargiguda along with other women came together to form a Reflect Circle – a forum that provides scope and space to discuss and address issues affecting the community and work on solutions in a collective and organized manner. Facilitated by the Pathways Project, the Reflect Circle identified the lack of higher education for girls emerged as one of the key problems, while mapping issues of major concerns. The members were sensitized on the importance of girls’ education and were motivated to allow and encourage girls to continue their studies.

The initiative commenced with extending support to girls like Mamita and Radane by convincing their parents. Mothers of both the girls were Reflect Circle members. When the girls showed interest to pursue their college education, Reflect Circle members and JKS staff tried convincing the parents. The efforts finally paid off when the parents agreed to allow their girls to pursue their dreams.

And now Radane has been enrolled in 10+2 Art Course at Bhawanipatna Women’s College and Mamita in 10+2 Commerce Course in the Government Autonomous College. Setting a brilliant example for other aspirational girls in the village, both girls are now happily pursuing their +2 year in college. Radna and Mamita’s story is just the first step towards overall educational empowerment of girls in the village. It’s with such small victories, that the possibility of increasing the literacy rate of girls and women in Kalahandi district will increase.