This story is about three young siblings– Ram, Shyam and Bandana, all of whom were affected by MDR tuberculosis. Ram & Shyam are twins. The disease affected the teenagers one after another in quick succession to justify its contiguous nature.  While the disease spread fast and furiously like fire, the RNTCP team and CARE counselor were no less competent and committed to douse it quickly and returned back to the youngsters their bubbling lives what the diseases tried to snatch away. Under the Lilly MDR TB partnership, CARE works closely with RNTCP for improving the treatment adherence of MDR TB patients. The adolescents belonged to a poor family who had their father, the only earning member in the family, to earn by vending ‘ghugni’  in a roadside ghugni cart. They stayed in almost a crammed condition in two small rooms in Guskara, a small municipal town of the district Bardhaman, West Bengal.
Let’s take a closer look at the lives of these three young children– their ailments, sufferings and relief.

CARE and motivation helps ‘Ram’ complete his unfinished drawing
The disease first affected Ram. Ram usually helped his father in running the small enterprise. However, episodic fever with irritable coughing that persisted for long kept this young, jovial teenager away from work and study regularly. The family and Ram in particular was however reluctant to take this recurrence of the illness seriously. The family made over the counter purchase of medicine whenever Ram was sick and discontinued medication the moment he felt relieved of fever and cough. He was put on DOT but he was irregular in taking medicine. Time came when each bout of ailment lasted longer than the earlier one and Ram felt he was growing too frail to even go out. He was also spitting blood whenever he coughed. In his later description of the illness, Ram said to experience a sharp pain in his chest whenever he coughed. It seemed to him that someone was tearing part his lungs and badly hammering his ribs. For nights together he could not sleep and neither could his siblings till one winter morning of December in 2012 Ram was taken to Guskara BPHC. His sputum sample was sent for culture and was finally diagnosed as MDRTB. While the treatment for MDRTB is quite complex it became further complicated because the young boy by then became too depressed for not being able to complete his studies and neither help his father in the business.
{Ghugni is a very popular roadside food item in West Bengal and elsewhere. This grab-on-the go food items tastes extremely spicy}

Moreover, his prolonged sickness made him tied to his home and compelled him to withdraw from his friends. Fearing that such a depressed condition would hamper his overall compliance with the prescribed medication, CARE counselor started speaking to him over telephone on a regular basis. The counselling sessions over telephone not only reminded Ram about taking medicines but also motivated him to take up his study and artwork which was his passion. Apart from Ram, the counselor also asked his father to ensure that Ram is allowed to appear for his school exam so that the boy does not lose his potential academic career.

To ensure that the poor family gets some sort of financial assistance as incentive for completing the treatment CARE counselor also approached the local municipal authority. After much discussion and verification of the family’s impoverished condition the municipality assured financial assistance through its Gratuitous Relief fund  .

All these positive interventions cumulatively inculcated within Ram an urge to be cured. To his counselor’s and caregiver’s surprise, he took medicines without failing even for once during the full treatment period of 24 months. Besides, he enthusiastically completed his study and even took interest in drawing and painting, afresh. Ram has completed his full medicine course & waiting for last culture result. He is now 18 years old and study in class-X. He also learns computer operations. Ram also gives tuition to primary students. He wishes to move across different places & collect experience from those places. 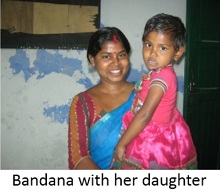 Bandana quickly acquired the infection from Ram because the siblings stayed in a small room that was poorly ventilated. While Ram was diagnosed with MDRTB and the counselor was regularly visiting their home to educate and aware his family members on the disease, Bandana was advised several times to stay away from the family as she was then a suckling mother. For quite obvious reason her four months old daughter was at risk to catch the disease which could be fatal for her. However, Bandana paid no heed to the advices and continued to stay there as there was no one to take care of her child at her husband’s home. Very soon, with almost similar symptom as that of her elder brother, Bandana reached to the same health center and was diagnosed as Drug Resistant Tuberculosis. She finally realized that her life is at risk and so was her daughter. Bandana wasted no time to take medicines. In fact health and wellbeing of her daughter worried her the most.

The way Ram was responding to the treatment, encouraged Bandana as well to comply with the treatment requirement. But she felt nauseated at the very sight of the drug. Quite often she reported her apprehension that the drugs that she was taking were adversely reacting in her body, poisoning her body system and therefore making her feel utterly miserable. However, every time the CARE counselor patiently listened to her difficulties and counseled her.  It was her flawless and careful observation that did not let Bandana falter. As a matter with their every bits of advice Bandana was growing confident and empowered for self-care.

A behavioral change occurred simultaneously. She started eating properly and adequately, consumed enough water, took medicines regularly and knew when to consult doctor. Bandana has also completed her 24 months medicine course & waiting for last culture result. She has gained weight, regained her vitality and spent more time in caring her daughter. She wish to see her child getting better education in a better school.

(Provision for this fund is made by the state government of West Bengal to support families/individual under extreme crisis caused due to natural disaster or if the person is physically and cognitively infirm. It is also given to ‘poor’ person who has to devote sufficient time in attending sick wards and compromise their daily earning. CARE counselor observed their poor economic condition during home visit and discussed with municipal chairman and motivated him to support this family so that they continue treatment).

The fire still flickers, the pain is however healed
When everything was going fine and Ram and Bandana were almost half way through the treatment, their youngest brother, Shyam was diagnosed as having the same disease.

Without losing hope and in strong determination the young boy enrolled himself for the medication. He listened carefully to the suggestions of the counselor, adhered well with the treatment procedure, cooperated with the caregivers and took self-care. Like his brother and sister, Shyam too is recipient of Gratuitous fund of Rupees 120 per month from the Municipality.  His medication is presently continuing and the boy is undaunted in way to seek remedy.