A symphony after the Green Revolution 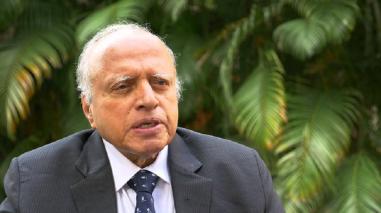 Basanta Kumar Kar, Chief Executive Officer (CEO), the Coalition Interviews Recipient of Ramon Magsaysay Award, World Food Prize, and Padma Vibushan Award, Professor M S Swaminathan.Mr. Swaminathan has been acclaimed by TIME magazine as one of the twenty most influential Asians of the 20th century and one of the only three from India so far, the other two being Mahatma Gandhi and Rabindranath Tagore. He has been described by the United Nations Environment Programme as the ‘Father of Economic Ecology’ because of his leadership to the Green Revolution in Agriculture.

The Coalition with a vision to achieve sustainable food and nutrition security for all was formed under his able leadership following a large consultation on nutrition security held at the MS Swaminathan Research Foundation (MSSRF), Chennai (India) in August 2007.In a tete-a-tete with, Basanta Kar he talks about issues of strategic interest and   Gandhiji’s first visit to Odisha in 1921. He also shares his personal observations on poverty, hunger and many other stories of change.

I thought of the Coalition at the end of the meeting at MSSRF, Chennai since several highly motivated individuals and institutions were concerned about the eradication of malnutrition particularly in women and children in India. India has a large malnutrition burden and we should ensure that all concerned individuals give a helping hand in changing this situation. I felt that the Coalition of the compassionate will help to accelerate progress and minimise causes in relation to actions on the following points. It is a symphony after the Green Revolution.

The Green Revolution was concerned with the increase and productivity of major crops, particularly wheat and rice. A Nutrition revolution mainstreams nutritional criteria in the cropping system. This is why I developed the Farming Systems for Nutrition Programme.

The action research project should have five components. We should start the programme in several districts where the above symbiotic action plan will be implemented.

The leadership agenda should primarily concern itself with mobilizing technology and public policy for achieving freedom from hunger and malnutrition.

For several years the Coalition was an informal agency. It has now become a formal entity; the goal, however, remains the same. We should aim to ensure that every child, woman, and man has an opportunity for a productive and healthy life through balanced nutrition and appropriate employment. The Coalition can play a vital role in realising ‘Zero Hunger’ and a World free from malnutrition agenda in the world.