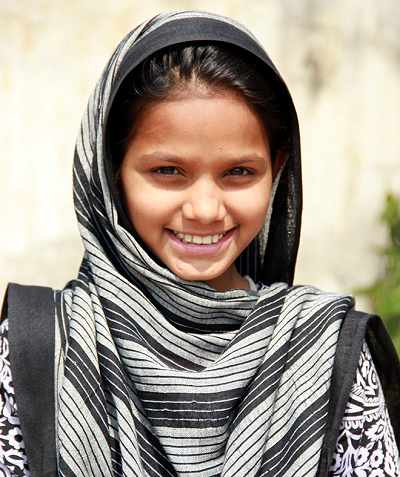 Murshida is the first girl from the village Mahaun in Mewat district of Haryana, to study beyond primary school. A 2013 Udaan graduate, she studied until third grade in the village school and then dropped out. It was only when Join My Village field staff went to her village, met her hesitant parents and eventually convinced them to enrol her at Udaan, that Murshida got the opportunity to re-start her education and consequently enter secondary school.

Now twelve-year old Murshida studies and lives in the government residential school Kasturba Gandhi Balika Vidyalaya (KGBV), and is currently awaiting results of her eighth grade exams. She will begin 9th grade studies soon, and says she expects to score very well in maths, science and social studies, and do fairly well in the other subjects, Hindi, and English. She says, “Hindi is my favorite subject as I love the stories and poems in them.”

Murshida considers this a tough time for her as she may not get admission in the school hostel for the next session, and that will make her education more difficult, if not impossible. I met Murshida during the annual examination period and she shared her preparation routine with me. She says, “I would study daily for 3-4 hours to prepare for the exams. The hostel where I live has a park where I used to make nearly 15 rounds around it reading and learning, as this helped me memorize better.”

Murshida is thankful to her father for supporting her to continue her education, and expresses her gratitude to Join My Village and Udaan for giving her this chance of a lifetime to better shape her future. She also wants this opportunity for her sibling. In addition to her two elder brothers and one younger brother, Murshida has a nine-year old sister named Naheeda, who is in second grade studying at the village school. Murshida strongly wishes that her sister Naheeda be enrolled at the Join My Village supported Udaan school. Happy with Udaan’s education system, her father is also willing to send Naheeda to Udaan in the next batch. 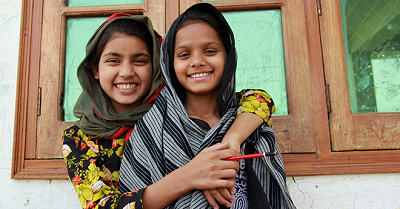 Murshida’s father used to work as a labourer, but now earns a living as a tailor. She says her father would not have sent her to study given the backward societal mind-sets in the village with regard to girls’ education. But after his daughter’s experience at Udaan, he now tells other girls’ fathers in the village to send them to school, too. She tells me that he says, “No other girl has studied from our village before, but I will educate you.” He wants her to become a teacher.

While meeting girls studying at Join My Village supported schools, oddly enough often I find that it is the mother who is a barrier to education, rather than the father. Murshida’s mother doesn’t want her to study, and keeps telling her husband to bring her back home. This is most likely because she is missing out on a helping hand, unlike other mothers in the village who have daughters living at home. She probably wants her back so that Murshida can help with the household work while she gets back to her previous occupation as a tailor. For now though Murshida’s father’s progressive notion towards his daughter’s education dominates, and thankfully so!

Before I leave the campus, Murshida shares her experience and her fears about her current school. Murshida says, “KGBV was till 12th grade but now one can study there only till 10th grade, so I am not sure where I’ll continue after that. While I hope to be able to study at KGBV for as long as possible, KGBV can’t replace Udaan for me. It doesn’t have the homey atmosphere like Udaan, which I like much more! Udaan was very much like my home – the teachers took care of us with a lot of love and affection, just like parents, and I liked everything here. From Udaan I learned maths, Urdu, Hindi, everything for the first time. If it was not for Udaan I would have been working at home today.”