With grit and courage, she became a Hero 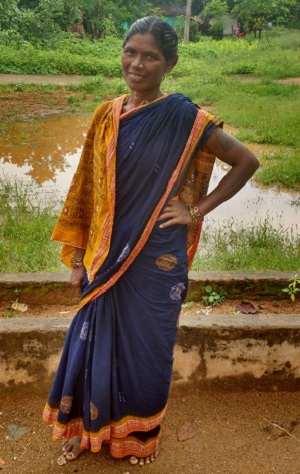 Arna Majhi, a 45-year-old, tribal woman from Boringpadar village, in Narla Block, Bhawanipatna, Orissa, lives with her husband, and her daughter. Today she works as an animator with CARE India at a Farmer Field School (FFS) under project Pathways, inspiring other women to adopt modern agricultural practices to increase their farm yield and improve their family income.

However, situation was not so good always. Earlier, Arna Majhi, and her husband used to work as an agricultural labour. During our interaction she mentioned, ‘It was difficult to earn enough to have two full meals those days, but I always had this dream of doing something and making a name for myself’.

In 2012, when CARE India came to Boringpadar village for project ‘Pathways’. Arna Majhi’s zeal to achieve something and the grit and determination to work hard for it, made CARE team believe in her. She was selected as a women champion from her village, who will be trained by CARE India in implementing modern agricultural practices.

District coordinator for Pathways, counselled her and her husband, and made them realise the benefits of modern agricultural practices in their village, which lack even basic facilities. Arna Majhi was sent for 3-day block level agriculture training to Rangpadar, and for a one-week seed treatment and modern agriculture practices training to Bhubneshwar. Post the training she along with her husband has meticulously implemented the practices of seed treatment and line sowing in her field, and as a result their farm yield increased by 50%.

She became an overnight celebrity in her village, and women from all the neighborhood started asking her advice to do farming. She was also hailed by the District Collector, and her field was selected as the model farm for others to learn.

This success further motivated her to take up bigger responsibilities, and she got associated with CARE India, and started working as an animator at a FFS in her village. Today Arna Majhi, is a role model for all women across the area, and she travels to various villages in the district along with CARE and motivates others with her story.

Arna’s dedication has started showing result, as in last couple of years over 100 women farmers have joined Arna in her mission and have successfully implemented modern agricultural techniques to increase the yields of their farm.

Today Arna Majhi, thanks CARE India for believing in her, and providing her with a platform through which she could not only improve her life, but also act as a role model and inspire others to improve their lives too.

CARE India also salutes women like ‘Arna Majhi’, who only with their grit and courage have fought against all odds to come out as a hero.

Pathways, focuses on developing multiple ways towards a secure and resilient livelihood for some of the most ethnically and socially marginalised women in the least developed areas of the country.