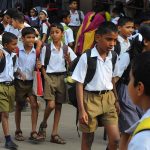 Several civil society organizations, teacher unions, and academicians working in the education sector across many states of India, have slammed the Parliament’s decision to pass, ‘The Right of Children to Free and Compulsory Education (Second Amendment) Bill, 2017’. Criticizing the new move, they said, “The government should not fail children to cover up the education system’s failure.”

This bill paves the way for scrapping of the provision for ‘no-detention policy’ (NDP) by allowing states to detain children in class 5 and 8.

Expressing strong opposition to the amendment and why it shouldn’t be dropped, experts from CARE India, an NGO for the underprivileged, says according to the National Family Health Survey 4 (2015-2016) data, one of the top six reasons for school dropouts was “repeated failure,” with 3.5 per cent of the cases at the national level being due to this. Clearly, repetition contributes to students dropping out from school, they said. While the NDP has been held responsible for decline of learning outcomes, Annual Status of Education Report (ASER) data shows consistent decline, not just from 2010, but from 2005, when both board exams and detention existed. One may infer that the current low performance is not caused by NDP, but is part of a long-term trend that predates its introduction, the experts said. “Getting to school is often a social struggle for children from marginalized communities and they should be supported in achieving learning outcomes, not pushed out by creating a climate of fear. Continued lower learning outcomes among rural students are largely due to poor infrastructure, lack of facilities and linguistic barriers,” said experts from CARE.

The NGO further adds that the amendment passed by Lok Sabha fails to address the root causes of poor learning, and risks penalizing students from poor and marginalized communities for the system’s failure. The amendment aims, “to improve the learning outcomes in the elementary classes”. Yet, no methods for improvement of outcomes (of learning) are suggested here beyond the two months of remedial teaching, individualizing the problem. Poor quality of education and declining learning outcomes are inevitable in a school system where 50% schools lack head-teachers, 8% of primary schools have only one teacher, and 90% schools lack the minimum infrastructure laid down by the law, said sources.

The NDP is part of a larger set of pedagogical reforms rooted in the National Curriculum Framework (NCF, recognized as the national curriculum under Section 7.6 of the RTE) 13, that includes age appropriate grade placement, child-centred pedagogy, fear-free learning environment and formative assessment. Its abolition is likely to affect implementation of all these provisions, say experts from CARE.

“Abolition of screening procedures and admission in age-appropriate classes may lose its value if students are not given a chance to catch up. The decision to abolish NDP risks contributing to the growth of private coaching industry,” they add. Detention based on purely school-based exams could risk putting the continuation of students admitted under section 12 (1) (c) at risk of detention as a first step towards being pushed out of school. Section 12 (1) (c) of RTE Act mandates 25 per cent reservation for children from economically and socially disadvantaged sections, in private unaided schools.

Negative impact on child and education

“Since the introduction of the NDP, the annual dropout rate has halved, and 13 out of 20 states have experienced improvement in board examinations, suggesting no negative consequences of the policy. The proposed amendment to the RTE Act risks penalizing students for the system’s failure and is discriminatory, risking disproportionate negative impact on the education of children from marginalized communities,” say experts from CARE.

Repeating a grade contributes to poor mental health outcomes and a negative attitude of students to school and learning, leading to poor long-term social outcomes, and results in students dropping out of school, and decreases the likelihood that a student will participate in post-secondary schooling, they said. “In the rural and urban poor scenario, many of those who drop out are likely to turn to child labour,” the NGO stressed.