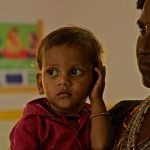 One in every three children in India is undernourished and one in every two children is anaemic. Overall, the levels of anaemia among women and girls has stagnated over the last decade, from 55.3% (according to the 2005-06 National Family Health Survey, or NFHS-3) to 53% (2015-16 National Family Health Survey, or NFHS-4). Almost 58% of pregnant women in India are anaemic. The prevalence of some primary indicators of child undernutrition has dropped, but trends in wasting show an overall increase. It is evident that the rate of improvement is lagging.

Despite a robust policy environment and programme commitment on nutrition, especially those aimed at tackling malnutrition among children and mothers, high levels of child undernutrition persist. Legislations such as the National Food Security Act 2013, which mandates food and nutrition entitlements for children, pregnant and breastfeeding mothers with maternity support, provide a strong policy framework for protecting, supporting and promoting nutrition targets.

The government’s other nutrition-focused interventions provide a strong foundation for addressing the immediate underlying determinants of undernutrition, through both direct and indirect interventions. A wide spectrum of national programmes exists with the intention of improving nutrition outcomes, including the Integrated Child Development Services, the National Health Mission, the Janani Suraksha Yojana, Swachh Bharat, the National Rural Drinking Water Programme and the Matritva Sahyog Yojana.

India’s health has improved, but recent data highlights the stark variability in how nutrition and health programmes are reaching women and children. The level of malnutrition in our country is a symptom of the social inequalities in our communities. There are multiple competing demands on women because of unequal power relations within the family and community. Women often are unable to even breastfeed optimally due to the lack of counselling, inadequate healthcare support and maternity protection. A mother’s lack of education is among the top risk factors for malnutrition in children. In many households, women still do not have the power to decide how food and other resources should be distributed among family, including their children and themselves.

The lack of targeted action among the most vulnerable mothers and children is another gaping hole. There has long been a mismatch between the intentions and actual implementation of the government’s three comprehensive and flagship social protection programmes—the Targeted Public Distribution System, Mid-Day Meal Scheme and the Mahatma Gandhi National Rural Employment Guarantee Act. All three programmes suffer from issues like incomplete coverage of the target population, basic problems of quality, inadequate monitoring, leakages and vigilance.

The states with the greatest need for the programme have the lowest coverage and budgetary allocations. In fact, due to the complexity of nutrition budgeting and since states are responsible for mobilising 40% of the total budget, the poorer states are most often unable to mobilise adequate funding for nutrition because of focusing on other development priorities.

What more is needed

With the launch of the POSHAN Abhiyan, or the National Nutrition Mission, there are high hopes and soaring expectations. However, addressing the underlying causes of nutrition will be the lodestar for overcoming the disparities in nutritional status. The seriousness with which the promises made within the government’s policies and programmes are implemented will determine their true success.