A cruel and deceptive green 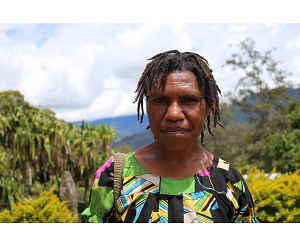 It’s lusciously green all around us in this eastern highland community in Chauve province of Papua New Guinea.  Deceptively and almost cruelly green.  My colleagues from CARE Papua New Guinea and I have driven two hours from Goroka, the capital of the Eastern Highlands Province, to visit one of the communities where CARE is currently working to provide much needed assistance to those affected by the El Niño drought, the worst since 1997-98. The El Niño drought has affected more than 60 million people worldwide. In terms of the sheer numbers of people affected, it is the largest humanitarian crisis in the world today.

In Papua New Guinea, over 2.7 million people are affected, and of those 400,000 are considered to be severely affected. The community we visited today – in this beautiful, rugged mountainous region – is one of many that have suffered from the extended drought. Traditional water sources have dried up, and they need to walk for many hours to collect water for drinking and bathing.

I sit on the ground alongside Cristina Simon, mother of six, and widowed just one month ago. Cristina tells me about how she only eats one meal a day, as do her older children. That one daily meal consists primarily of wild growing bush weeds, supplemented with locally grown pandera fruit, which provides a bit of starch, and occasionally some local wild beans. These are foods that are not normally eaten if other food is available. Now no other food is available, says Cristina, and it will be all they have for at least another three to four months. She works hard to make sure the younger children get two meals a day to ward off their hunger, but in a country where nearly half of all children already suffer from malnutrition and stunted growth, her young children are bound to suffer from the effects of poor nutrition in the coming months and unfortunately in the coming years.

The gentleman sitting next to Cristina is a man named Nathaniel. He doesn’t know how old he is, but knows he was born right after the Second World War.  Nathaniel describes this drought as the worst in his memory – worse than the one in 1997-98 – and he worries about women like Cristina who have to walk three hours each way to collect drinking water. Cristina says she or her children walk to collect water and now it takes nearly the whole day to go to and from the river, as the nearby stream has dried up and even with recent rains is mostly run-off from the mountains. She tells me that it is a dangerous walk and they have to go in groups or accompanied by men so as not to be attacked and violated. Not only must she worry about where she will get food to feed her family, but also to keep herself and her children safe in a country that suffers from some of the highest rates of violence in the world.

I ask Cristina what she thinks her options are, and how she will manage the next few months until the staple crop of sweet potato is harvested, which will be nearly an entire year since the last crop.  She smiles at me, at the absurdity of the question probably, as she says that she will continue to work hard to make sure her hillside garden produces and hopes that her children will manage to survive on the food that they have.  I think of Cristina and the many other women and men like Nathaniel, their children and families that make up the 60 million affected by this gigantic climatic phenomenon known as El Niño and know that we must do more. We owe them more. We have waited far too long in this crisis that have left too many hungry, too many children to suffer from the effects of malnutrition for their entire lives, and to suffer from the outcomes of lack of water in so very many different ways, including poor hygiene, increased incidence of diarrhoea and – tragically – the threat of being attacked and violated when collecting water.

Our surroundings are indeed beautiful, the mountainsides nearly emerald green with a slight wisp of cloud at the peak, and colourful flowers grow freely. But the reality of life is a very different story than this picturesque scene.  Cristina’s reality needs to become part of our reality.  We must share with her the responsibility of ensuring her children stay safe and survive.