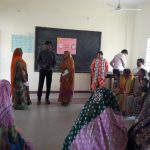 One evening I received a call and was enquired about my interest in joining a Training of Trainers on Personal Advancement and Career Enhancement (PACE). My agreement was followed by the arrival of an over 500-page document about the PACE training programme, communication, problem-solving and decision making, time management, water; sanitation and hygiene (WASH) and financial literacy. All of this had to be read to develop a synopsis which seemed like a herculean task back then. As I began to flip the pages I was engrossed into reading the material. With every passing minute, I was pinched by illustrations and examples provided under every topic. The characters of female garment workers (used throughout) seemed to come alive as if narrating their incidents only to deepen my reflection towards various issues faced by women as individual, family member and a worker.

Before I realised, the time had passed, the synopsis submitted, and I was en route to Indore to attend a seven-day training. I just want to sum up a few crucial aspects based on my reading, training experience and reflection of the PACE training focused on communication, problem-solving and decision making

Our communication largely depends on the usage of various components, our body language is as vital as the words we speak.  For E.g. If I am sad and a friend asks me -how are you? I reply I am fine, whereas my expressions do not reflect the same. Thus, the friend will not go by words and will rather enquire what happened, by asking ‘is there some problem?’ He/she would have caught the non-verbal cues such as the tone, facial expressions and body language.

As a child is born the inequalities are visible in the society, where male childbirth is considered more joyous in comparison to the girl child. There on, as the child grows up freedom of choice, movement, decision making power, sharing of responsibility, ownership and access to family assets and their social status continues to vary cause of their gender. Gender bias hinders communication to a large extent, women/girls are considered to have a lower IQ and thus are not approached for problem-solving or support. For e.g. In an interview process, a male interviewer due to gender bias practices pays selective attention towards the female interviewee leading to unclear communication between the two.  Due to such communication, the interviewee’s chance of being shortlisted is jeopardized.

The different styles of communication include (i) Aggressive, (ii) Submissive, and (iii) Assertive. Amongst the three styles, an assertive style of communication helps others to understand one’s point of view on a subject as one tries to understand their viewpoints on the same subject. It allows an individual to be controlled in one’s approach and assert one’s opinion in a peaceful manner and reach a conclusion with increased acceptance from others.

Profiling and its usage for effective communication

Profiling is the process of knowing about an individual’s personality and can play a crucial role in effective communication. To understand the profile of a person one is communicating with it is important to know his/her likes and dislikes, attitude and viewpoints on relevant topics, previous interaction experience if any and the power dynamics with one another.

The profiling information can be used for effective communication. For instance, whilst holding an interview by putting the person at ease, building a good rapport, facilitating the entire communication process will ensure getting desirable results of holding the interview successfully.

Role of communication in consensus building

The term ‘finding middle ground/consensus building’ is related to addressing everyone’s concern which leads to a higher level of acceptance and ownership towards the decision taken.  The role of communication is to assist people involved to exchange their ideas and opinion with each other, influence or be influenced by one another to build consensus.

The difference between the desired state and an existing state is the problem. For instance, one wants to reach the station by 8 pm to catch the train, due to excess traffic one reaches at 8:15 pm instead and misses the train.

To understand problem-solving and decision making in a manner I would use another Problem Suppose You fall ill and it is the last date for submission of school admission form for your child. The response to the problem and decision making could be in the following ways: –

Decision making is a process of making the best choice or choosing an alternative one in each condition to ensure one gets the desired results.

The pre-requisites for decision making include having a ready access to resources and information that are required for decision making, belief in one’s own opinion, necessary authority to take a decision, courage to stand by one’s own decision and be prepared for success or failure as a result of the decision taken.

The ability of women to make decisions is often affected by gender stereotyping and socialization. This results in the low value placed with decision-making skills amidst women which are further visible in the ability to make decisions at home and work front.  Some of the gender-related barriers while taking decision include pre-conceived notions due to which women are often led to believe that they do not know how to handle problems.

The above reflections help draw a conclusion that communicating with impact and skills for problem-solving and decision making is an invaluable asset for any individual. This ability is largely affected by the socialization process which leads to the denial of opportunities and exposure to develop these skills.  However, one can build these capacities by understanding one’s style of communication and the change she/he would like to bring about to influence the opinions of others leading to better problem solving and decision making.