Planning family in a healthier way 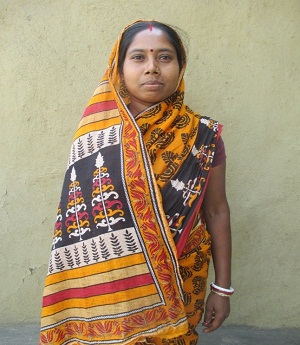 ﻿Manju Rani Mahato is a 35 year old housewife from the Garafusra Village of Purulia District. When the HEVS team first met her through its reproductive health initiatives she was already a mother of 5. Wife of Gouranga Prasad Mahato Manju’s daily living revolves around everyday household chores besides attending the meetings of Durgamoyee Mahila Samity, the SHG that she’s a member of. With the SHG loans acquired from the bank Manju helps Gourango with some financial support in raising her five children. The daughters Sanjita (14 years), Suchita (10 years), Moumita (8 years) and twins Arpita and Amit (12 years) are all school goers. Amit is the only son to the 35 year old couple. Gouranga who presently does soil conservation work was earlier a Rural Medical Practioner (RMP) providing first aid treatment and basic medication to minor ailments. With the meagre incomes earned through such labour, the struggles faced by the family can well be assumed without much difficulty.

Identifying the situation though HEVS interventions

Though the mothering of 5 children at the age of 35 may not be an uncommon sight in the Garafusra village but in Manju’s case it certainly reveals the very young age at which she bore her first child. The four more followed soon after every time within a two years gap. The poor mother grappling between responsibilities had no time or knowhow of how repeated childbirth was negatively impacting both her and her children’s health. Cluster Facilitator Gita Mahato when first identified Manju’s situation through health trainings received from the HEVS team neither was she following any temporary family planning method nor had she planned for any semi permanent method. The contraceptive pills available from the local subcenter were being consumed irregularly and at times stopped altogether. The outcome thus was inevitable. 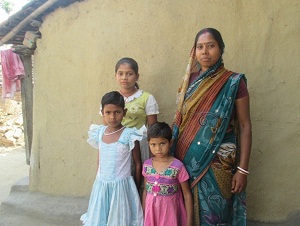 The VO leader makes it her own battle

Gita who was earlier a campaigner for Community Health Care Management Initiative (CHCMI) had already gained exposure to certain reproductive health education. Understanding the importance of proper family planning it didn’t take her much long to realize that the problem was not just lack of awareness; but in fact it was much deep rooted. Delving deep into Manju’s family environment soon it became clear to her that the problem was embedded not in Manju herself but was arising from that of her husband Gourango and mother in law Kaushalya Mahato. 55 year old Kaushalya (also a mother of two sons and 2 daughters) is an orthodox traditional woman possessing limited knowledge on family planning methods. In her times such practices were hardly prevalent originating from the belief that these methods are not only harmful but also fatal. Falling ill on a regular basis, sometimes with stomach disorders and sometimes with others she was the primary source of discouragement in Manju’s adoption of family planning method. Ironically enough Gouranga too who was earlier an RMP himself and distributing contraceptive pills to other villagers was constantly discouraging Manju in taking the medicines. The reason was clear. Mother of four daughters had to give birth to more sons who would later take up farming and constitute support mechanism to the household. Helpless Manju feeling pressed between Kaushalya and Gouranga’s demand had no alternatives other than succumbing to them. 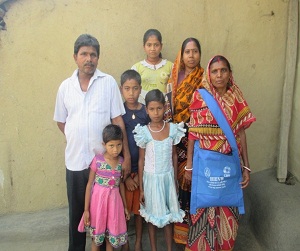 Understanding the root cause of the problem Gita immediately began her campaigns to rescue Manju from her woes. Through the regular monthly meetings and other outside the meeting home visits both Manju and Kaushalya were reached with health discussions on the benefits of family planning.

Finally after three months of incessant intervention Manju at last underwent tubectomy in the month of January. Kaushalya the mother of two daughters could at last be helped to reach the realization that the family required no more children and that oral contraceptives or the usage of Copper T is not as harmful as are mistakenly believed to be.

Influenced by the step undertaken by Manju, today her sister in law Kanika Mahato too has opted for tubectomy after the delivery of two sons. Kanika Mahato wife of Ambuj Mahato living in Dhanbad underwent the surgery in the month of February 2015 following the footsteps of Manju who underwent surgery in January.

The HEVS team feels proud for the gigantic leap undertaken by Manju and Kanika Mahato and salutes Kaushalya too for her understanding and courage to embrace change.