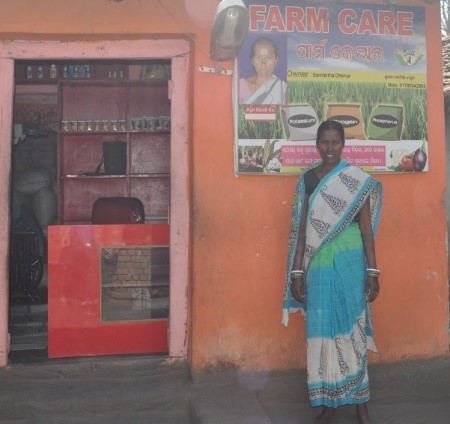 In the small obscure village of Amguda in Dharamgarh block of Odisha’s Kalahandi district, Sumati Dharua sits in her modest agricultural kiosk “Farm Care” explaining confidently the benefits of a high-yielding variety of seed to a rural woman farmer.  The kiosk boasts of variety of seeds, fertilisers, pesticides and agricultural equipment –inputs which not only increase agricultural productivity but also save a great deal of time and effort for the rural farmers.

Seeing the confidence Sumati depicts during her interactions with other community members it would seem as she had been a micro entrepreneur since long. However, it’s been only few months since Sumati started her entrepreneurial venture, moreover she does not have any formal education. “I have studied till class IV and did not know much to read and write” she says.

As a member of Maa Laxmi Narayani Self-Help Group (SHG) constituted in her village, Sumati gradually started taking interest in saving and credit activities of the group. She was an active member.

The opportunity to enhance her skills and strengthen the SHG soon arrived when CARE India’s Pathways programme was implemented in her village, in 2013.

Pathways Project in consultation with the Maa Laxmi Narayani SHG group decided to start an agri-kiosk to promote women centered agri-extension system and to enable easy access of women farmers to agricultural inputs. The purpose was to make the availability of inputs easily accessible to women farmers. After brainstorming with the community members, and local partners, the Project team went ahead to provide the much needed support. Finally, an agri-kiosk was opened in April 2015. And with the recommendation of all the group members, Sumati was chosen to manage the kiosk. She was a unanimous choice for her leadership traits and also because of her prior experience as an accomplished farmer.

The SHG was also provided with agricultural appliances such as weeder, thresher, weighing machine etc. which are kept in the kiosk for other farmers to hire and use. “We never knew that such appliances exist which make our work easy and productive. Earlier we had to spend days in these activities and now it is done only in a few hours,” smiles Sumati.

After the training on business development and management of the kiosk, her self-confidence increased manifold, “I can now buy and sell all the agricultural products, keep accounts, and take decision to enhance profit or avoid loss,” she says proudly.

Sumati’s fame has gained prominence in the village. Rasmita Patel, a vegetable farmer approached Sumati for advice as the leaves of her okra plants were being eaten away by insects. “I had confidence on Sumati as she has received training and is aware about various problems associated with crops. I took her advice and applied the pesticide she suggested, and my okra plants survived. I made a profit of Rs 6,000 by selling the produce in the market.” Similarly, Durbal Majhi was extremely happy to see an increase in his paddy yield. “I am grateful to Sumati who guided me to use this variety of paddy in my field.”

The agriculture kiosk managed with Sumati’s has not only helped in increasing and improving agricultural output, but also brought about a gradual change in the gender relationships in the village.  The kiosk has also given community members access to modern agricultural inputs and tools. The SHG too has also been strengthened under Sumati’s leadership.

Motivated and guided by CARE Sumati has become one of the change leaders.

The Pathways programme builds on the vital roles that women play in smallholder agriculture, meeting the food needs of their households and communities, and contributing to development and growth. The goal of the programme is to increase the productivity and empowerment of women smallholder farmers in more equitable agriculture systems.