Victory and Valor of a Vanished Village 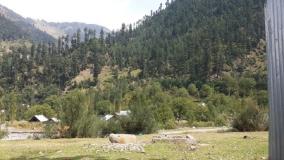 Himalayan mountains, resplendent with pristine natural beauty, the site which attracts tourist attention globally, is now a place dotted with sad scenes of dilapidated houses, shaky school buildings, barren agricultural lands, empty shops with piles of garbage caused by the flash floods. A foul stench emanates all over and it will take quite some time to return to normalcy. A recent estimate puts the loss at a staggering Rs1.5 trillion. Recently, while travelling near the Uri sector near Pakistan border, I witnessed the shattering devastation of a whole village getting washed off lock, stock and barrel. I came across a poignant story of bits of lands, parts of houses, shops in market, tower of a mosque and human settlements getting uprooted by the fury of a reservoir for River Jhelum. The gushing waters deviated from the normal course, carrying boulders, pebbles and rocks. The rush of water made the village resemble another river stream, leaving behind only ruins of damaged assets and property. A busy market, 68 well-built homes, vast stretches of arable lands, a herd of livestock have all fallen prey to the flash floods. All that has been left of the structures are a couple of walls, there perhaps to help us locate the scene of devastation. The back-breaking toil of the previous generations’ had set the up village and now it will take decades to repair and rebuild it. Belasalambad used to be a beautiful village, in Baramulla District of Kashmir Valley, endowed with natural resources as it was located in the foothills of the Western Himalayas Mountain Range. The community which narrowly escaped the rude shocks of the earthquake in 2005, has now been badly hit by a disaster of a different kind. 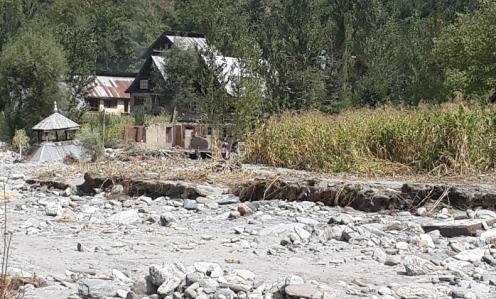 “I worked for 50 years to build a house for myself, it got washed away in five seconds”, says Khader. While going round to see the traces of the settlement a grieving elder pointed out the roof of a structure lying on the ground. It was a broken off piece of the village mosque. Another person threw a stone at a spot and asked me to imagine a house which was here only a few days ago. All I could see were traces of partially broken walls.  Between September 5th and now, community has resolved to reconstruct their homes with whatever little they could save from the disaster. A general sense of the community’s preparedness could be visible both in their mindset and efforts; yet the effort required is colossal, far beyond the capacity of the community.

Without looking back, the community is determined to rebuild their shelters by taking financial support from the government and leverage other financial support from other sources like civil society organizations. They are determinately looking for opportunities to rise again and move towards rebuilding their lives and livelihoods. While the government has announced Rs 75000 for a fully damaged pukka house and Rs 17500 for a fully damaged kutcha house, the community is gathering up its courage and quickly moving towards making shift shelters, assembled from the remnants of the damaged houses so that their kith and kin remain protected from the oncoming winter. The village provides an example of how a community has the wherewithal to withstand adverse conditions. Their adaptability and resilience in the face of such unforeseen disasters, is inspirational. CARE India provided both dry ration and non-food items to the affected families in Baramulla and Pulwama Districts in Kashmir as part of Jammu& Kashmir Flood Response Initiative.