Women and girls in the face of disasters 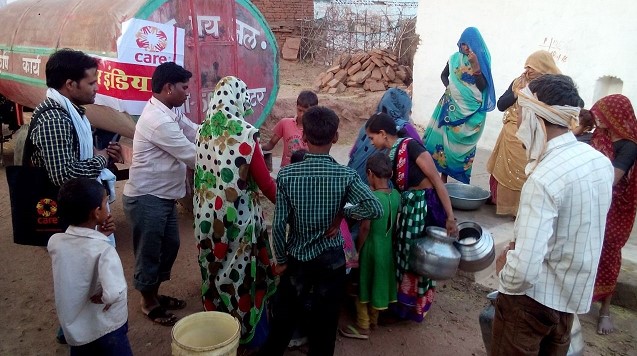 Research across sectors in humanitarian work has demonstrated that disasters do not have the same impact on women, men, boys and girls of different age groups. The impact varies for marginalized sections of our communities who have already been facing the wrath of caste, religion, and ethnicity based discrimination during non-disaster times.  There are different needs due to the differential impact and a well-planned humanitarian assistance should take the sex and age dis-aggregated needs into consideration.

Water and Sanitation is one of the many areas in which the suffering of women and girls is exacerbated during disasters. During disasters such as flood, cyclone, and drought, women and girls spend 4-6 hours a day, walking, to far off places in search of drinking water. During floods when toilets and hand pumps are all inundated, women wait until late evening to go out and relieve themselves. Many reduce their intake of food and water due to this fear.Going to isolated places also puts their safety at risk.

Maintaining personal hygiene during disasters becomes a challenge when people are taking shelter in relief camps or on embankments in the absence of privacy. During Bihar Floods 2016, out of the 37 villages where Joint Rapid Needs Assessments were conducted by Sphere India (a coalition of humanitarian organizations in India), the requirement of clean cloth for menstrual hygiene came up as one of the most urgent needs in 16 affected villages. More than 50% women were borrowing cloth from neighboring hamlets where the effect of floods was less. Another challenge with displaced women during floods is that they don’t have access to soap or clean water. They are forced to wash sanitary cloth in contaminated water and re-use. At times due to continuous rains and high humidity, the cloth used during menstruation are not even properly dried before reusing, leading to urinary tract infections. Further, lack of sanitary napkins/clean cloth reduces the mobility of adolescent women and girls.

Non-availability of soap may seem a simple issue. There is, however, extremely alarming data of adolescent girls compromising on their safety for soap. According to a report from Refugees International, during July 2000, UNHCR had to stop the supply of soap to approximately half a million Congolese and Burundian refugees in Tanzania, which led to increased drop-out of adolescent girls from schools. There were also reports of girls having sex in exchange for soap.

The riots in Muzaffarnagar and Shamli districts in Uttar Pradesh state in India in 2013 caught the attention of many across the nation due to the deaths of infants and children. Apart from the cold weather, there were some stories which were never shared. During a Rapid Needs Assessment conducted by CARE India in the shelter camps in Shamli, it was found that within a period of 3 months after settling in camps, 200 adolescent girls had been married and there were preparations for more in the Suneti camp. On further probing, it was found that parents of such girls were worried about the safety of their daughters in camps (CARE India reports, 2013).

As the circumstances post-disaster, make it difficult for communities to observe standard precautions, there are increased instances of the spread of HIV transmission. For women in the reproductive age group, unwanted sex often results in unwanted pregnancies. Adopting crude ways of abortions in the absence of functional health facilities also leads to the death of women due to sepsis infections. Another challenge faced post-disasters is the disruption in treatment due to non-availability of medicines. The population already living with HIV on ART treatment suddenly experience a break in the treatment. Similar is the issue with TB patients who miss their DOTS treatment due to unavailability of dosage.

In their socially assigned role of being the breadwinner, men go through significant psychological pressure to earn, buy food, rations and meet the basic needs of the family during disasters. In instances when women die and men have to take care of children, it becomes very difficult for them as they have traditionally not been involved child-rearing and household activities. Similarly, when women or older children have to assume leadership of a  household due to the death of a male member during the disaster, they are unable to take decisions, access market or negotiate with service providers due to lack of prior involvement in such tasks.

As the needs of women, men, girls and boys of different age groups differ significantly and the impact of not understanding the segregated needs can be grave, it is important that the need assessments, as well as responses, are dis-aggregated by sex and age. There is ample evidence that gender roles change during and post disasters. Gender equality and participation of women and men, girls and boys in all tasks irrespective of gender norms at all times can help address the demands of changing roles.

DISCLAIMER : Views expressed above are the author’s own.