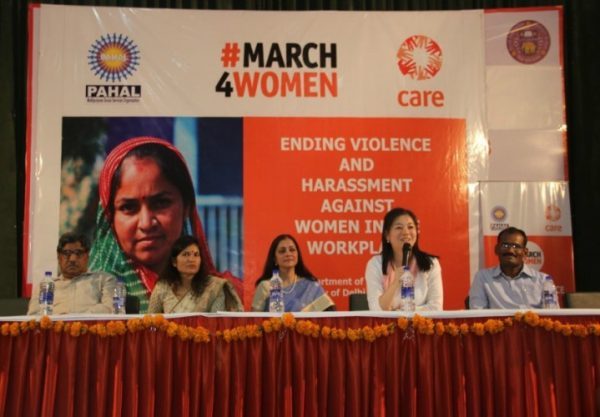 CARE organised ‘#March4Women’, a global movement for gender equality and to end discrimination and violence at workplaces around the world. CARE India, in collaboration with PAHAL, organised a multifaceted event on March 19, 2018, with youth at the Department of Social Work, University of Delhi, North Campus. The event included talks, panel discussions, nukkad nataks and called for stronger policies and action on preventing harassment at workplaces and violence against women. The highlight of the event was a Silent March from Delhi School of Social Work to the Arts Faculty which witnessed participation from college students, activists, advocates, civil society organisations and members from the academia.

The Silent March was flagged off by Mr. Rajan Bahadur, MD and CEO, CARE India, from Delhi School of Social Work to the Arts Faculty, Delhi University. It was a symbolic initiative to encourage people of all genders to join and march for gender equality and action against harassment at workplaces.

Two well-executed plays, ‘Mard’ by Asmita Theatre Group and another on the impact of harassment at workplace on women by Mahak Group enthralled the audience with powerful messages around the need to do away with societal stereotypes, prevent violence against women in varied forms and to generate equal opportunities for women in employment and all walks of life. A drawing competition for the student of Delhi University around the topic was also conducted that witnessed an overwhelming participation.